The Sony Xperia Tablet Z comes in a big box, but there's very little of interest inside. Other than the tablet itself, there's a compact charger that pushes out enough juice to charge a tablet (some phone chargers may not be up to the task), a microUSB cable to go with it and a bunch of manuals.

The Tablet Z comes with a screen protector pre-applied, but depending how you intend on using the tablet, you may be better off without it, as it adds some extra glare to the screen.

The Sony Xperia Tablet Z is based on the OmniBalance design philosophy, which was introduced by the Xperia Z smartphone. The bold angular styling is extra sleek and, we have to say, the design of one of the best-looking flagships scales impressively well to tablet size.

We're glad Sony decided not to keep the glass back though - the soft matte finish offers a lot more grip and is much, much better at hiding fingerprints. It's harder to clean up once it gets dirty, but we'll take that over a constantly greasy back any day.

The slim profile drives up the cool factor, but it's the weight that really counts. You can feel the difference and the Sony Xperia Tablet Z is quite easy to hold in one hand, even by its corner. Also, the screen bezel is wide enough to make the tablet comfortable to hold in any orientation.

Lightweight materials and thin design didn't compromise the build quality though, the tablet feels very sturdy in the hand and doesn't bend or twist. The matte plastic on the back is not quite as premium as aluminum, but it is a lot better than Samsung's glossy plastic.

Another potential problem is that all pots and slots are sealed by plastic flaps, which means you have to open and close a flap every time you plug in a cable or want to change a card.

There are two exposed pogo pins that can be used to charge the tablet with the special Tablet Z cradle, so you can at least save yourself the trouble of undoing the microUSB port flap every time you need to charge the thing. But the cradle costs extra, of course.

Those flaps are, of course, mandated by the IP57 certification, which protects the Sony Xperia Tablet Z against dust and water (water jets or submersion up to 1m for half an hour).

It's great to see that Sony kept all ports and slots standard and fairly easy to access (you don't need a special tool to access the microSIM card slot), despite the extra hassle of having to waterproof them.

Also, not using a proprietary port like Apple or Samsung (or even Sony itself with the Xperia Tablet S) is handy too, you can have only one charger or one MHL adapter to use with the tablet and a phone.

The Sony Xperia Tablet Z uses a TFT display of WUXGA resolution (1920 x 1200) covered by shatter-proof glass (the supplier is undisclosed). The Tablet Z uses what Sony eagerly calls an OptiContrast design, which means there's no air gap between the glass and the display panel and the touch sensor has been integrated into the display panel itself.

Having no air gap reduces glare from bright sunlight and also makes the display assembly thinner. Sony also says this makes the display appear black when the screen is turned off (it is a lot darker than the Nexus 10 screen). Finally, the image on displays manufactured in this way appears to be closer to the glass surface adding for a more high-end look. 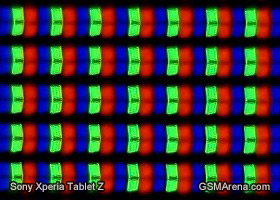 The Xperia Tablet Z has Sony's BRAVIA Engine 2, which constantly processes the screen's image feed to enhance contrast and make things look sharper, while reducing noise and enhancing color rendering. It can be turned off, but with BRAVIA Engine on images do look punchier.

The screen is reasonably sharp to begin with - at 224ppi, it's close to the 264ppi of the iPad 4. The Apple tablet does have a slight advantage in sharpness, but overall this is one of the better screens on an Android tablet (the Nexus 10 screen is sharper, 299ppi, but it has other issues).

Unlike Sony phones, viewing angles on the Xperia Tablet Z are very good with a minor contrast loss when viewed at an angle.

Colors are vibrant, but our unit came with a fairly warm screen, which may not be to everyone's liking.

Despite the OptiContrast design of the display, it's still pretty reflective, resulting in less than perfect sunlight legibility. It's not as reflective as the Nexus 10's screen, but it isn't much better either.

this tablet was the one for me, but the lack of a stylus support (even in just hardware, not software) was a deal breaker as the functionality is too useful to be ignored in a new tablet, i could go for a samsung note 10.1, but i will to see sony's n...