Standard gallery with a funky twist

The Xperia U uses the traditional droid Gallery, which hasn't really seen much change in Gingerbread. It has good functionality, cool 3D looks and nice transition effects, and this time shows full resolution images.

The Xperia U puts the transparent glowing strip to good use in the Gallery app. The strip glows in the dominant color of the photo you're currently viewing. It will glow red for a sunset, green for grass and blue for sky.

The standard gallery • The 3D and Multi Angle views

The BRAVIA engine enhances contrast and colors by sharpening the image and reducing noise. These steps would normally lead to artifacts, but you'll have to look from really up close to notice. You can switch BRAVIA off, but we recommend keeping it on - it really improves the image quality.

There is no dedicated video player app on the Xperia U as in most of the droids out there. DivX and XviD videos are supported but the Xperia not all videos got through.

Unlike the Xperia S, the U didn't play any of the 1080p videos we threw at it, but 720p videos worked fine.

Watching a video on the Xperia U

You can download a video player off the Google Play Store, but that won't solve the 1080p video problem, there just doesn't seem to be enough processing power. Some of the free players out there however will address other deficiencies of the Xperia U video player though, like the lack of subtitles.

The Xperia U shares the same music player as the Xperia S. You're welcomed to a Cover Flow-like interface and you can swipe left and right to skip tracks (complete with a smooth 3D effect).

This happens on the Playing tab; the second one available called My Music and is where your library gets organized. Tracks are sorted by album, artist, playlist, all tracks, SensMe channel, and favorites. There's also a link to Sony's Music Unlimited service.

The transparent strip does its trick here as well. It glows in color that matches the album art of the song. Unfortunately though, there isn't an option to make it pulse to the rhythm of the track.

Audiophiles will appreciate the rich selection of equalizer presets. There's a custom preset too - it lets you adjust five frequency bands and there's a Clear Bass slider too.

The More tab offers a Headphone surround option, which can be set to Studio, Club or Concert hall. If you're not using the headphones, you can turn the xLOUD feature on, which optimizes the sound for the Xperia S loudspeaker.

Sony has neatly added track info and playback controls on the lockscreen once music starts playing. The music controls replace the clock, which might be annoying if you just want to check the time. Still, the clock slides out of view, so you have about a second to see what time it is (or just look at the small clock in the upper right corner).

The Sony Xperia U is equipped with an FM radio, which has a really neat and simple interface. It automatically scans the area for the available stations and places "notches" on the frequency dial for easier scrolling to the next station. There's a Force mono option to use in case of poor reception.

The Sony Xperia U did quite well in the first part of our audio output quality test. When connected to an active external amplifier, the smartphone got excellent scores all over the field and had above average loudness, which adds up to a great performance.

There's some degradation when headphones come into play, most notably in terms of distortion. The stereo crosstalk rises a bit too, but it's nothing to worry about. The rest of the reading remain great though, which means that you are getting pretty good overall performance. 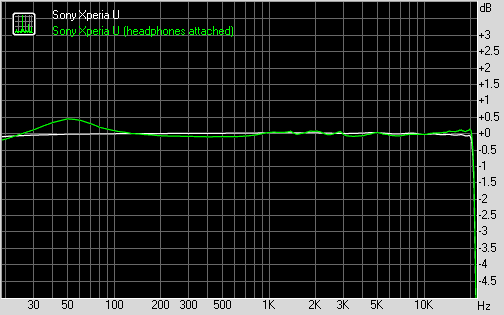