The BRAVIA engine 2 enhances contrast and colors by sharpening the image and reducing noise. These steps normally lead to visual artifacts, but you'll have to look at them very close up to notice. You can switch BRAVIA off, but we recommend keeping it on - it really improves the viewing experience straight on.

Movies with an editor

The video player is dubbed Movies and it too has a new interface. It's connected to Gracenote, which helps you find additional information about the movies you have on board. It works fine, but it identified our version of The Mask not as the famous Jim Carrey flick, but rather as a horror movie from 1961, which goes by the same name.

Unfortunately, the Xperia V video player was very selective about the movies it would play. Videos with AC3 audio ran fine but without sound. Some XviD movies would play okay and others wouldn't play at all. DivX movies were okay throughout, though.

A video editing app called Movie Studio is bundled too. It lets you edit video, images, and audio together (both imported from files as well as recorded/taken by the device itself), using a variety of cool transitions. You can then export the resulting project into a video file that you can share using the V's generous connectivity features (more on this below).

Walkman music player on board

Another of the redesigned Sony media apps which has gotten a facelift is the new Walkman music player. It retains all the functionality of the older music players but adds a little bit extra here and there.

It is divided into Playing and My music panels.

Sony has improved on the Walkman player's settings. There's a new ClearAudio+ option, which determines the best audio quality settings depending on the song you're listening to.

The Sony Xperia V also features an FM Radio aboard complete with RDS support. The app automatically seeks and adds bookmarks to stations in range, although you'll need to have a set of headphones attached to use as an antenna.

The water and dust proofing has cost the Sony Xperia V a tiny bit in terms of audio output, but the smartphone still performs identically to the Sony Xperia T for the most part. This means that when you use it with an active external amplifier you get good scores all over. The volume levels were slightly below average, but the overall performance is still good.

The degradation when you plug in a pair of headphones consists of a moderate hike in stereo crosstalk rises and distortion levels. Neither of those readings is anything to worry too badly about, though. Volume levels remain about the same, though, which is not a common sight among smartphones. We'd rate the overall performance as good, although there are clearly superior options out there. 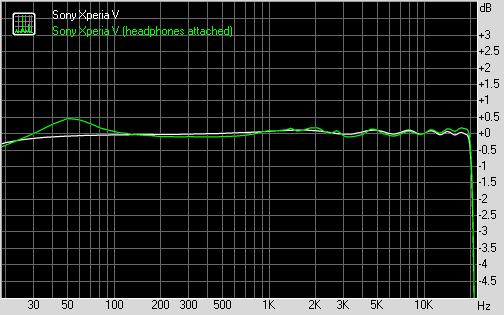 I've been using Sony Xperia V since 2012, even till now, whenever I use it, it still works very well.

My fifth year of Experia V and still using it for every thing. Phone, Internet, Navigation, Copy machine, photo etc.