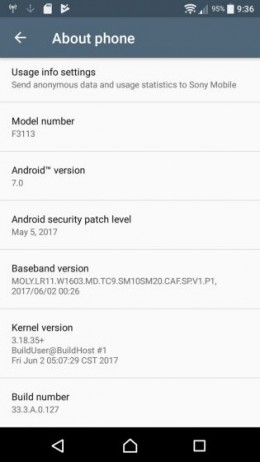 Unlike the rollout for the XA Ultra, which has only reached two of the phone's versions so far, the Nougat update for the XA is currently out for all five variations of this device. We're talking about units bearing the model numbers F3111, F3113, F3115 (all single-SIM), as well as F3112 and F3116 (these being dual-SIM iterations).

As you can see from the screenshot to the left, after you apply the update your Xperia XA will be on build number 33.3.A.0.127. The update comes with the May 5, 2017 security patch level - so it's almost up to date in that regard.

Sony Xperia XZ Premium gets its first update as well

After update to 7.0, both of my computer cant connect to my phone hotspot..

after i update my experia xa ultra the SCN mode in the camera are not functioning :(

same problem as mine. what can i do regarding on this?