Sony Xperia XZ1 Compact comes in a midsized paper box, which contains the phone itself, a regular 1.5A@5V charger plug and a USB Type-C Cable. There were no headphones bundled with our Xperia XZ1 Compact, but we think this a regional limitation and things may look different for your market.

Sony's Xperia XZ1 Compact measures 129 x 64 x 9.3 mm and weighs 140g. Its 4.6" screen makes it quite pocket friendly, and if we are to compare it to iPhones, it's like the missing link between the iPhone SE and iPhone 7.

The Compact is somewhat thicker than most of the phones out there, but Sony managed to keep the profile reasonably thin at 9.3mm and we are fine with that.

It's an Xperia, alright, and you can tell immediately. Sony may have refined the design, but the signature "looped" shape is here to stay for yet another generation. Water-proofing makes a comeback, washing away the disappointment from last year's X Compact . But for better or worse, the XZ1 Compact isn't built the same way the XZ1 is. 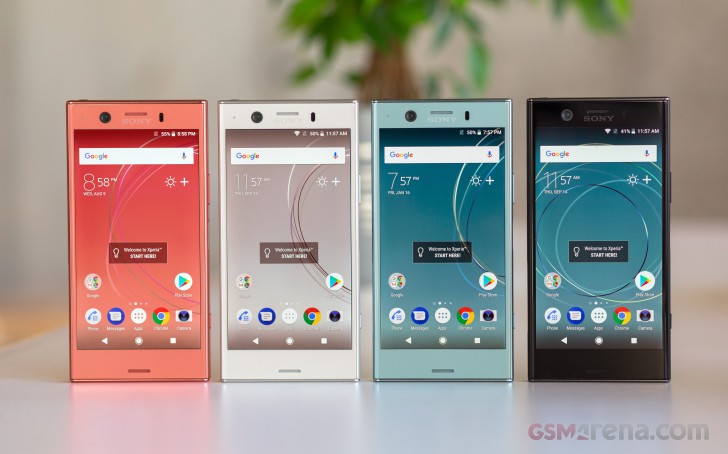 For starters, the XZ1 Compact is made of glass fiber reinforced plastic, which may sound like a fancy name to avoid saying it's all-plastic, but it's not a charade. This particular plastic is super sturdy, pretty scratch-resistant and should allow the phone to survive accidental drops better than any aluminum unibody phone, as it's able to absorb the impact better. 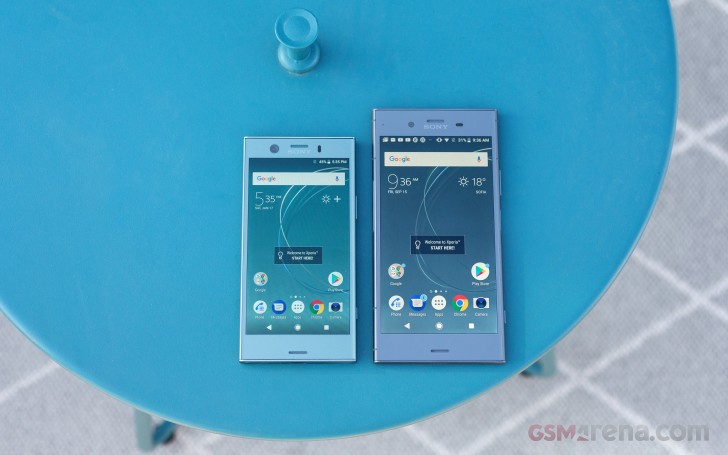 You may have noticed that the Compact doesn't have the same antenna lines as the bigger XZ1 model. In fact, it doesn't appear to feature any visible antennas. The XZ1 Compact indeed sports a much cleaner and uniform finish. This is a clear bonus from ditching the metal and going for a plastic back instead.

The top and bottom pieces of the Compact are made of metal alright. 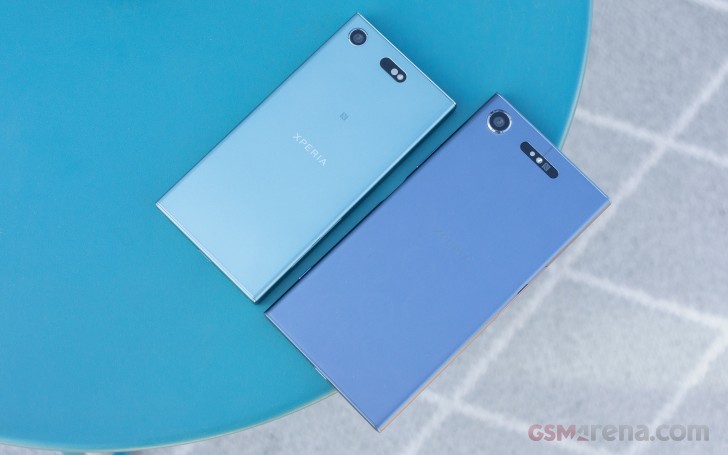 The screen bezels are here to say, though. We are sure Sony did a superb job of cramming all that flagship hardware into such a tiny body. And the maker claims it really needed the extra space to accommodate its signature side-mounted power button/fingerprint reader combination. We are perfectly fine with those bezels on such a small phone and it's easier for us to forgive them here rather than on the XZ1. We somewhat miss the bezel-less looks we saw on the XA1 series, though. 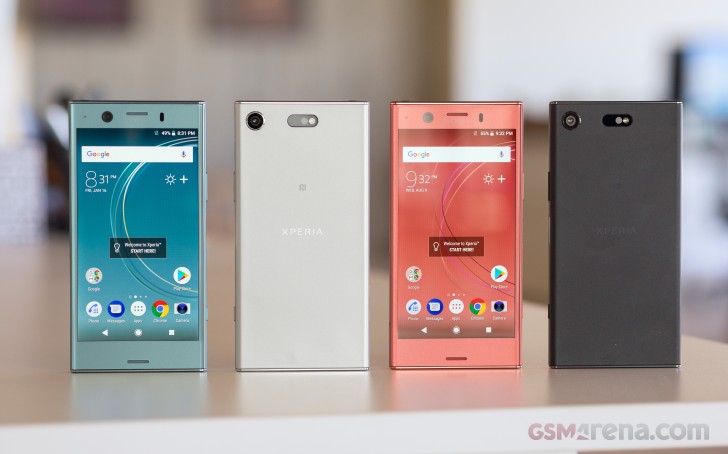 The Xperia XZ1 Compact feels really solid, and Sony did a great job with the finishes: toned down, yet playful for the Horizon Blue and Twilight Pink varieties and a more serious, formal look for Snow Silver and Black. And you do get to enjoy the color uninterrupted by antenna lines or plastic inserts. 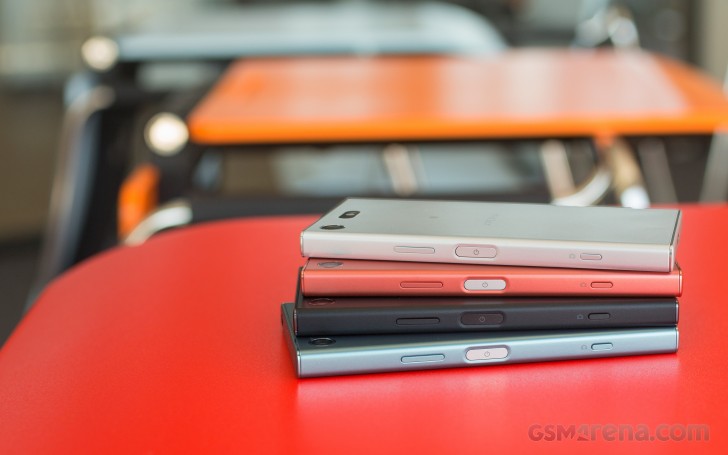 As you can imagine, handling the Xperia XZ1 Compact is one of the most comfortable and hassle-free experiences we've had in a while. The small footprint and comfy shape allow the full range of one-handed operations, while the rather flat frame and matte finish make for a very secure grip. 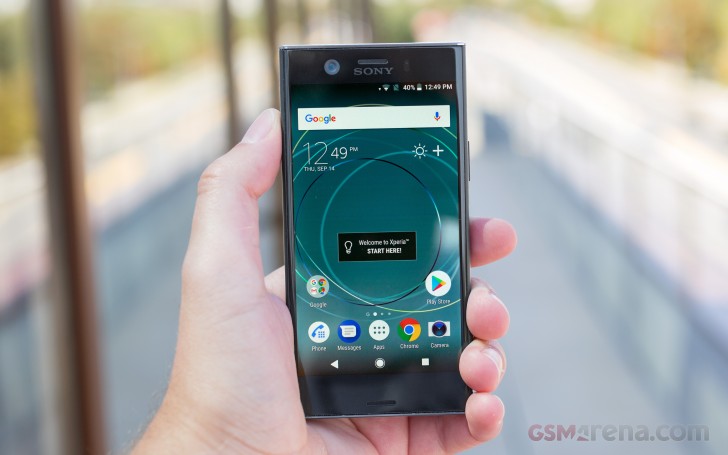 The entire front of the Xperia XZ1 Compact is covered by a Gorilla Glass 5 piece. Above the 4.6" screen is the super-wide 8MP selfie camera, the earpiece that also doubles as a second speaker, and a couple of sensors. There is also a tiny notification LED around, too. 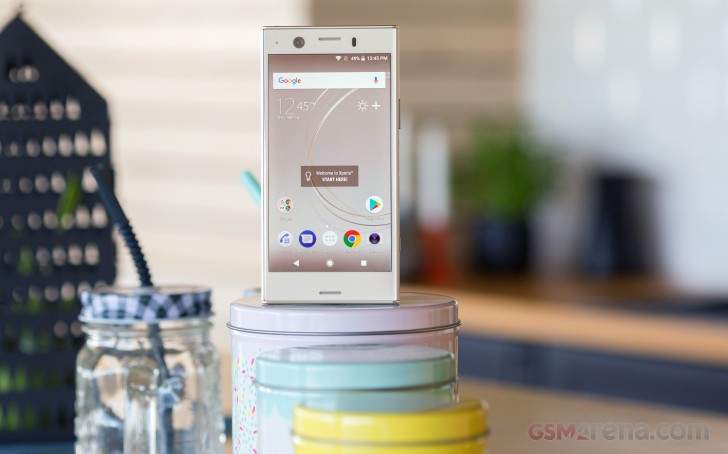 Below the display is the second speaker behind a small dotted grille.

The Xperia XZ1 Compact  the selfie camera  the bottom speaker

The SIM and microSD card cover is the only thing on the left. Pulling the cap out will pop the microSD card, but for the nanoSIM you'll have to use your nail or another sharp tool. This setup means the phone doesn't restart when you need to pull out the microSD card because the SIM card stays inside.

The right side of the XZ1 Compact  the microSD tray

The volume rocker and the camera shutter are on the left. Also around is the power/lock key, which doubles as a fingerprint scanner. This feature works everywhere but the US - unfortunately but not unexpectedly.

The right side  the power/locker keys

The audio jack and the second mic are on top of the Xperia XZ1 Compact. The USB Type-C port and the primary mic are at the bottom.

The top  the bottom

The 4.6-inch Xperia has the same 19MP, 1/2.3 Exmor RS setup on the back as the bigger XZ1. You might have seen it on the Xperia XZ Premium or the XZs as well. A single LED flash and the focus-assisting laser are also around.

The back of the XZ1 Compact  the 19MP camera