The Sony Xperia Z1 comes with a 5" 1080p Triluminos display, backed up by the company's X-Reality engine. Sony has already demonstrated the potential of that combo with the Xperia Z Ultra, so we know that it's clearly superior to the company's screens from the first half of the year.

The pixel density breaks down to 441ppi, which is as good as it gets in terms of sharpness. No matter how closely you look, you won't be able to tell pixels apart and images will always look tack sharp (provided they have enough resolution in the first place).

Here's a shot at the underlying pixel matrix of the screen that we've taken with our digital microscope. 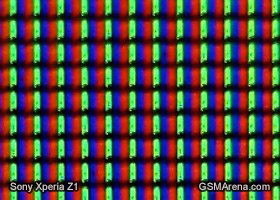 A key area that has seen improvement with the latest Sony display tech is viewing angles. Those have been a long-standing issue of all of the company's screens over the past few years, but now things are looking much better. You do get contrast compression when you look from a very wide angle, but everything still remains legible. At this point, the difference between this and the best screens in business is more about the premium feel of icons appearing as if printed on the screen. In terms of usability though, the Xperia Z1 is as good as any.

A word of warning is due as we've been getting a lot of user reports that not all Xperia Z1 units out there have the same quality screens. It seems some of them come with panels, which have the same properties as the one on the Xperia Z. These of course, may be pre-production samples or as conspiracy theiorists suggests, leftover panels from the Xperia Z production line. Whatever the case, have this one in mind when you are picking up yours.

The native display contrast of the Sony Xperia Z1 that we have is great and surprisingly, it's even much better than that of the Z Ultra. Colors are also nicely punchy, but still fairly accurate. If you'd like a bit of extra punch to your images and videos you should enable the X-Reality engine, which is the successor of the Mobile Bravia Engine. It aims to improve sharpness, reduce noise, while boosting contrast and saturation, and it does a pretty good job of it.


Even more impressively, the Xperia Z1's screen is much less reflective than those of its predecessor and the Z Ultra. This, combined with its higher brightness, helped the new Sony flagship smartphone to a great score in our dedicated sunlight legibility test. You will have very little issues with this one even in the sunniest of days.

All things considered, the Sony Xperia Z1's screen may not earn it too many bonus point in today's market saturated with mind-blowing displays, but it's no longer a liability as it was on the Xperia Z - in fact it even beats some of its rivals.

The Sony Xperia Z1 packs a massive 3,000mAh battery despite its slender body and a Snapdragon 800 chipset, making it fairly similar to the Xperia Z Ultra - except for the screen, which is 5" for the Z1 and 6.4" for the Z Ultra.

We expected the smaller screen to lead to an improved battery life, but that wasn't the case. Talk time is spectacular - the best we've seen yet - but web browsing and video playback times are just average. They haven't really moved since the original Xperia Z. At least standby power usage is low, leading to a decent endurance rating.

For more information, check out our blogpost for more details. I had the same problem last year. I changed the battery and it's working well now

Yes i have the same problem.The only solution is that we should not play games which needs heavy processing.