The Sony Xperia Z2 comes with a 5.2" 1080p Triluminos IPS display, backed up by the company's X-Reality engine. We've already seen the X-Reality Engine in action on the Xperia Z1, so we know that it's clearly superior to most of the screens Sony has produced in the past. The IPS display is definitely welcome as it deliver superb viewing angles.

The pixel density breaks down to 424ppi, which is as good as it gets in terms of sharpness. No matter how closely you look, you won't be able to tell pixels apart and images will always look tack sharp (provided they have enough resolution in the first place).

A key area that has seen further improvement courtesy of the IPS display is viewing angles. Those have been a long-standing issue of all of the company's screens over the past few years, but they have been tweaked in the Xperia Z1 and they are now even better in the Xperia Z2.

The native display contrast of the Sony Xperia Z2 is somewhat less impressive as on the Xperia Z1 because the Z2's screen isn't as bright as its predecessor's. Colors are nicely punchy, but still fairly accurate. If you'd like a bit of extra punch to your images and videos you should enable the X-Reality engine, which is the successor of the Mobile Bravia Engine. It aims to improve sharpness, reduce noise, while boosting contrast and saturation, and it does a pretty good job of it.

The Xperia Z2's screen is more reflective than the Xperia Z1's, which means we got a lesser score in our dedicated sunlight legibility test. We tried the Xperia Z1 and Xperia Z2 side by side under direct sunlight and being noticeably brighter, indeed we found the Xperia Z1 screen easier to read and work with.

The Sony Xperia Z2's screen may not earn it too many bonus point in today's market saturated with mind-blowing displays, but it's still a great unit and can't be held against the smartphone.

There are the usual sensors above the 5.2" display, next to a 2.2MP front-facing camera. What's new is the stereo speakers, a nice addition to the flagship spec sheet, helping an immersive experience when watching videos or listening to music.

Each speaker is hidden underneath a very thin but elongated grille carved out of the front glass. The top speaker doubles as an earpiece and the LED notification light is integrated therein too.

The right side of the Xperia Z2 is very busy. In the upper corner is the microSIM compartment under its protective flap. Just below it is the signature power key, followed by a volume rocker. Finally, there is the two-stage shutter key.

The left side has the microSD card slot and the microUSB port under a protective plastic lid as well. Naturally, it should be properly closed if you want your Xperia Z2 to be dust and water proof. The lanyard eyelet is also around.

Left side: microSD card slot and microUSB port, plus the lanyard eyelet

The top of the phone holds the exposed but waterproofed 3.5mm audio jack and the secondary microphone allowing stereo sound in videos and keeping ambient noise out of calls. The primary mic is at the bottom of the Sony Xperia Z2.

The water-resistant 3.5mm audio jack is left exposed • same goes for the loudspeaker on the bottom

The entire back is covered by a scratch-resistant glass of undisclosed origin. One of the key features of the Sony Xperia Z2 - the 20.7MP camera lens - is in the top left corner. It's a 27mm wide Sony G lens with a fast F/2.0 aperture and the Sony Exmor RS backside illuminated (BSI) sensor.

The back of the Xperia Z2

If you were hoping for a more powerful LED flash, dual or a true-tone LED, you'll be disappointed. The Xperia Z2 uses the same tiny singe-LED flash we saw on the Xperia Z1.

The Sony Xperia Z2 is powered by a 3,200mAh Li-Ion battery - sealed under the sheet of glass, it's non-user-replaceable as usual. It's a bigger battery, the one in the Z1 was only 3000 mAh. We couldn't wait to do our battery test and find out whether the new Xperia Z2 can do better than its predecessor. 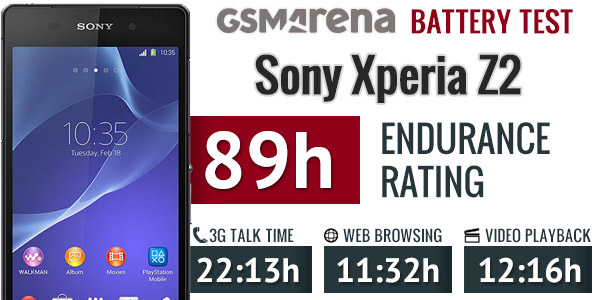 For a more detailed breakdown of the Sony Xperia Z2 battery performance check out our blogpost.

Im using xperia z2 since 2014 july. Such a wonderful phone and quality. Its really disappointing that sony is not selling smartphones in India.

i commenting with this phone which i had since 6 years, its even working perfectlyðŸ¤˜ i always making my phone in charging every night and playing games such as pubg, real racing 3, taking pictures in water etc. but sony still working&eth...

Unfortunately, one of the worst cost benefit I had bought in world of smartphone. Fragile screen for the price it costs. All little crash of 10 " is a new display.