The Sony Xperia Z3+ comes with the custom Sony gallery, called Album. Images are organized into groups of thumbnails and sorted by date. You can resize the image thumbnails with a pinch gesture all the way from a grid of tiny, tiny thumbnails to a single image view.

The gallery can pull images from your Facebook, Picasa or Flickr accounts for easy viewing in one spot. Alternatively, you can turn the Z3+ into a DLNA server and view photos from the device on a computer or compatible TV.

Also here are some special albums - Places, for one, which uses the geotagging info to sort photos by where they were taken, and Faces is another, which groups photos by the faces of the people in them.

Images can be cropped or rotated directly in the gallery. Quick sharing via Picasa, Email apps, Facebook, Bluetooth or MMS is also enabled. A simple slideshow mode with no transition settings is present as well.

There's also an image editor, which provides basic tools for enhancing your photos like cropping and color effects, but also a bit more advanced features like curves adjustment.

The video playing app is dubbed Movies and it has a simple interface, but is strong on codec support and subtitle handling. It's connected to Gracenote, which helps you find additional information about the movies and TV shows you have on the tablet.

The good news is that Sony has fixed up its codec support and the Xperia Z3+ plays just about everything - AVI (DivX, XviD), MP4 and even MKV and MOV. WMV files refused to play. DTS, DD and AC3 audio are not supported and that makes the videos that contain them unplayable, though you can see the picture moving underneath the error popup. The video player does support fully-customizable subtitles.

The music player app is named simply Music, the Walkman badge is no more. That said, the app offers largely the same interface and core functionality as before. The interface is based on tiles that sort your music collection by Artist, Albums, Playlists, all songs and even the songs your friends are listening to (but you need to link your Facebook account).

When there's music playing, the album art serves as background for the lockscreen, with controls in the notification list. The notification area also offers the now playing screen with music controls and the option to jump into the Walkman player.

The Now Playing screen shows a carousel with the tracks in the current playlist and the usual music controls below that. You can swipe left and right to move between tracks. The Infinite button will help you find the music video on YouTube, look up info about the artist on Wikipedia and search for lyrics on Google.

Gracenote is used here too and it can automatically download information about your tracks and album art or you can edit it manually.

Sony has improved the Walkman player's settings. There's the familiar ClearAudio+ option, which determines the best audio quality settings depending on the song you're listening to. Dynamic normalizer evens out the volume differences between tracks, which is great if you've mixed multiple albums from multiple sources.

The Sound enhancements offer even more settings. There's an equalizer with presets and manual settings (including tweaking Clear Bass). There's Surround sound mode too, which imitates the Studio, Club or Concert Hall experience. The Clear stereo mode enhances the perceivable stereo channel separation. Dynamic normalizer minimizes the difference in volume between songs (great if you're playing a shuffled mix).

A multitude of sound-enhancing features

The Sony Xperia Z3+ features an FM Radio aboard, complete with RDS support. The app has multiple skins and integrates with TrackID to recognize the currently playing song. You can even directly send an "I'm listening to..." post to Facebook.

The FM Radio • recognizing a song with TrackID

Audio quality is solid, but not perfect

The Sony Xperia Z3+ did very well when connected to an active external amplifier, posting excellent scores top to bottom. Volume levels were above average too, rounding up a flagship-grade performance here.

Sadly, the Xperia Z3+ couldn't maintain that performance in the second part of the test, when we made it work with our standard headphones set. A notable amount of extra stereo crosstalk appeared, and there was also some extra intermodulation distortion and frequency response fluctuations. None of those is a deal breaker, but we've come to expect better from flagships in 2015.

Anyway, here go the results so you can do your comparisons. 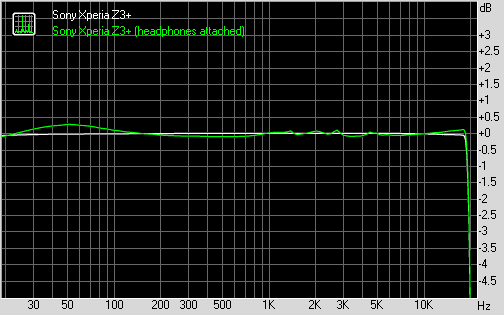 I use mine right now. I had to replace the battery a couple of years ago

It doesnt last long and dont you ever buy it

Slot 1not working. Pl let me how it works