The Sony Xperia ZR comes with the custom Sony gallery, called Album. Images are organized into stacks of thumbnails and sorted by date. You can opt to show all of your albums in one place, and there are three tabs above the stacks - Pictures, Map and Online.

Pictures is the main tab and one of its features managed to impress us: you can use pinch gestures to make the image thumbnails bigger or smaller. The whole thing is super responsive and hundreds of thumbs fall in and out of differently sized grids in a nifty animation.

Finally, the LED strip below the display lights up with different color (similar with the image on the screen) every time you scroll through the pictures.

Eye-candy video player, plays everything but struggles with AC3

The Xperia ZR did great with almost any file type and video codec we threw at it, including DivX and XviD. The only exceptions were MKV files and AC3 audio - videos with this audio codec played with no sound whatsoever.

The Walkman music player we've been seeing in Xperia smartphones since the second half of 2012, is also on board. It offers the same cool interface as before, but this time it has even more sound enhancement options.

The Walkman interface is divided into Playing and My music panels. In the My music section, you can update your album art and music info such as album, year released, etc. SensMe is included, meaning you can filter your songs by mood - upbeat, energetic, mellow, dance, etc. Creating playlists is enabled and you can also view your Facebook friends' activity if they too use the Walkman player.

The Now Playing screen offers the standard music controls, as well as shortcuts to the library, an "Infinity" key and the song cover art. The Infinity key lets you quickly look up a song on YouTube or browse for the lyrics, among others.

Audiophiles will be pleased to find a configurable 5-band equalizer with bass adjustment. There're even more elaborate alternatives at the Play Store, with support for a 10 or even 20-band equalizer.

Whenever the music player is on, there are music controls on the lockscreen. Swiping them to either side brings back the clock. The notification area also offers the now playing screen with music controls and the option to jump into the Walkman player.

The Sony Xperia ZR also features an FM Radio aboard complete with RDS support. The app automatically scans and saves stations in range, although you'll need to have a set of headphones attached to use as an antenna.

Google's own music player called Play Music is onboard as well. It went through a major UI overhaul and is now snappier and better looking. It features the brand new Listen Now feature which tries to determine what you like and uses the pattern of how you change tracks, so it can offer you relevant music to play next.

The Now Playing screen uses the song album art and gives you a quick shortcut to the rest of the artist's songs along with the basic play controls.

The Sony Xperia ZR performed excellently in the first part of our traditional audio quality test and was about on par with even the premium Xperia Z. The smartphone got great scores all over, and if it wasn't for its only average volume levels, it would have been perfect.

There's very little quality drop when you plug in a pair of headphones. The stereo crosstalk rises somewhat and some distortion creeps in, but neither of those is easy to notice without dedicated equipment. Volume levels remain average, but the overall performance is still quite good. 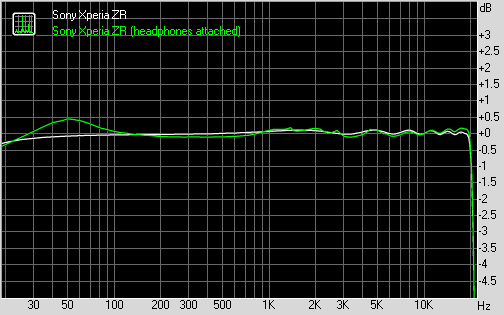 Can i use xperia zr without battery as tv box? It support mhl and mhl charge speed not enough to power on zr all the time.There is a dock charge port and alkol micro usb port.

You should need a old charger cut the pin of charger and get red wire in positive terminal of bettery and negitv to negitive after 3 to 4 minuts clean the bettery connecter using blad or knife and clean the bettery gold plated pins using blade or kni...

My Xperia ZR cant power on...can someone help me how to power on my device...please help me