Sony recently posted its own teardown of the PlayStation 5 console. Performed by Yasuhiro Ootori, Sony's VP of Mechanical Design Department, it is entirely in Japanese but you can enable subtitles through the YouTube player. You can find the video below.

There's a lot to discuss here, so let's do a breakdown of everything we have seen.

The first interesting thing you see in this video is the sheer size of the console. Sony is using the standard version of the PlayStation 5, which means it comes with the optical drive. We already knew the dimensions of the console but seeing it next to an adult human really shows how large it is. We will learn later why that is. 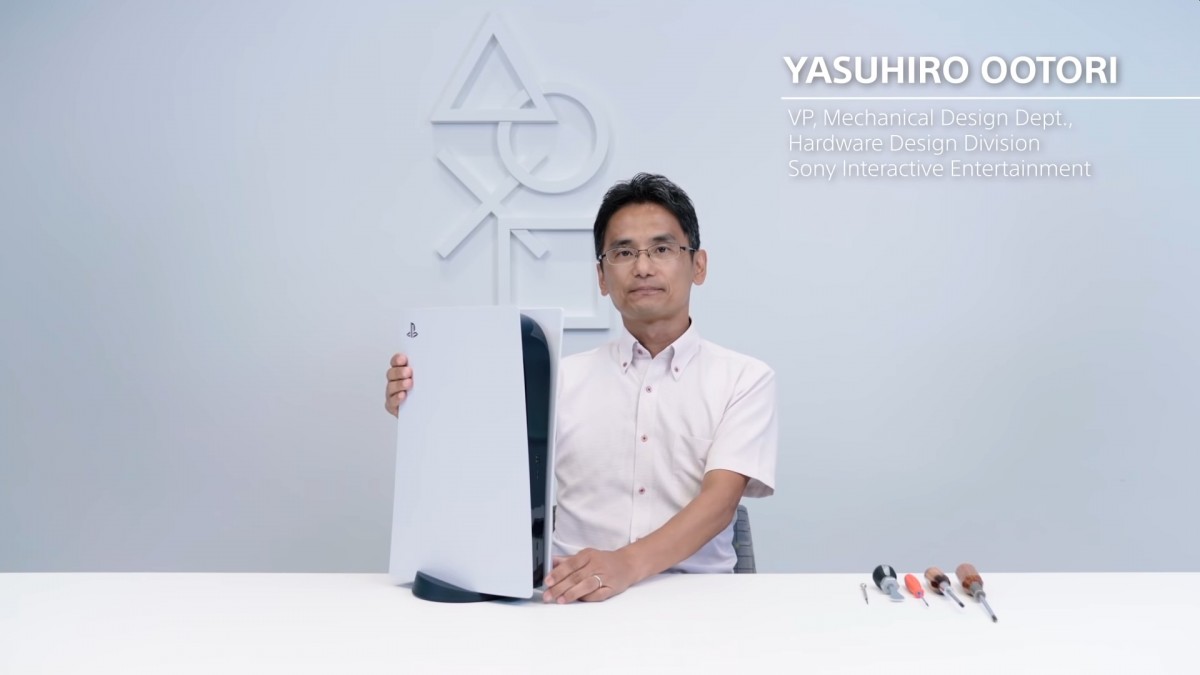 The PlayStation 5 comes with a stand that is required regardless of how you place the console - vertically or horizontally - as there are barely any flat sides to this design.

When used in the vertical position, the stand attaches using a large screw. Once removed, the screw can be stashed away inside a cleverly hidden compartment within the stand itself. The stand also houses a rubber plug, which can be used to cover the hole left by the screw on the console. This attention to detail brings back memories of the rotating PS logo on the PS2 and PS3 consoles. 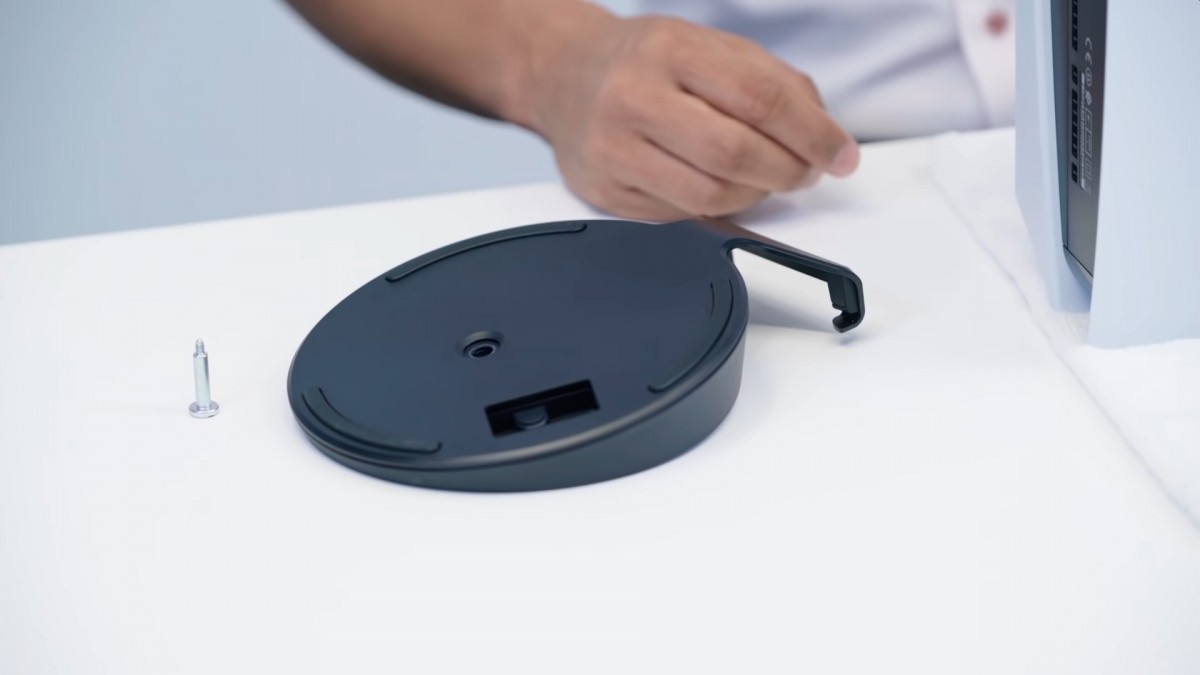 The same stand can then be attached to the wider edge using hooks for placing the console sideways.

The two giant side panels on the PlayStation 5 are designed to be user removable. They almost come across like the side panels on a standard PC case, wherein they can just be slid off without needing any tools. The removable panels also open up the possibility of custom side panels. 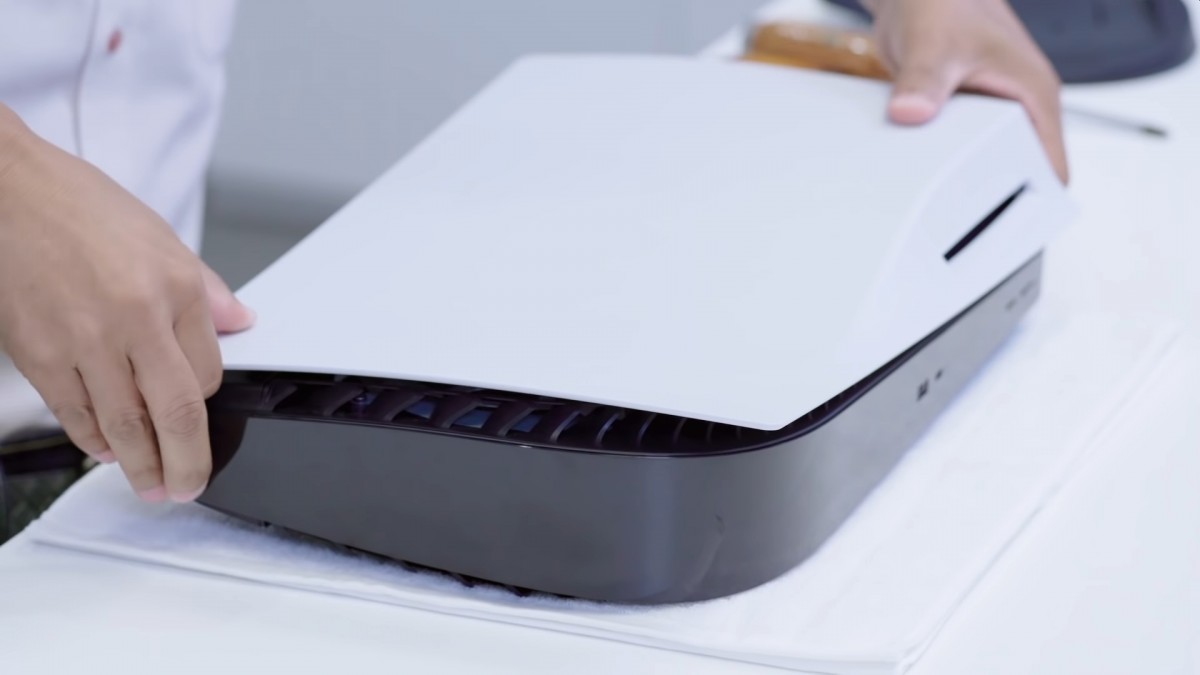 Inside the panels we have access to the user-replaceable M.2 SSD, where you can plug in your own drive to expand the storage of the console. The drive would be required to meet the specifications set by Sony and the company will later be publishing a list of drives that it has validated for use . Plugging in just any old M.2 drive can cause issues, so the smart thing to do is wait for the list to be published before purchasing a new drive for this console. 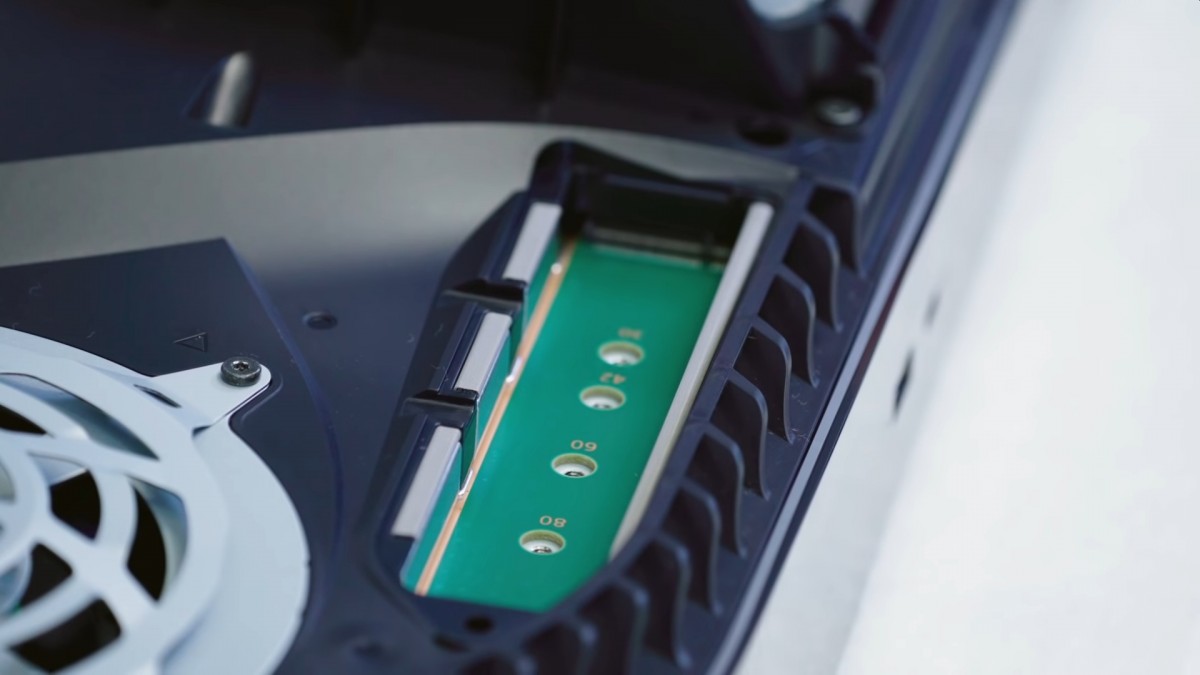 We also get a brief overview of the cooling system of the console, including a large 120mm diameter, 45mm thick centrifugal fan that is designed to pull in air from both sides and push it into the side and onto the heatsink. Sony has also cleverly created dust catcher vents where dust will naturally accumulate over time. This will let users easily vacuum off most of it without disassembling the console entirely. Beyond this point, the console is not designed to be opened by the user, at least not without voiding your warranty. Perhaps this is why the video rushes through most of the teardown procedure at this point so it can't really be used for a step by step teardown, should you choose to do it. 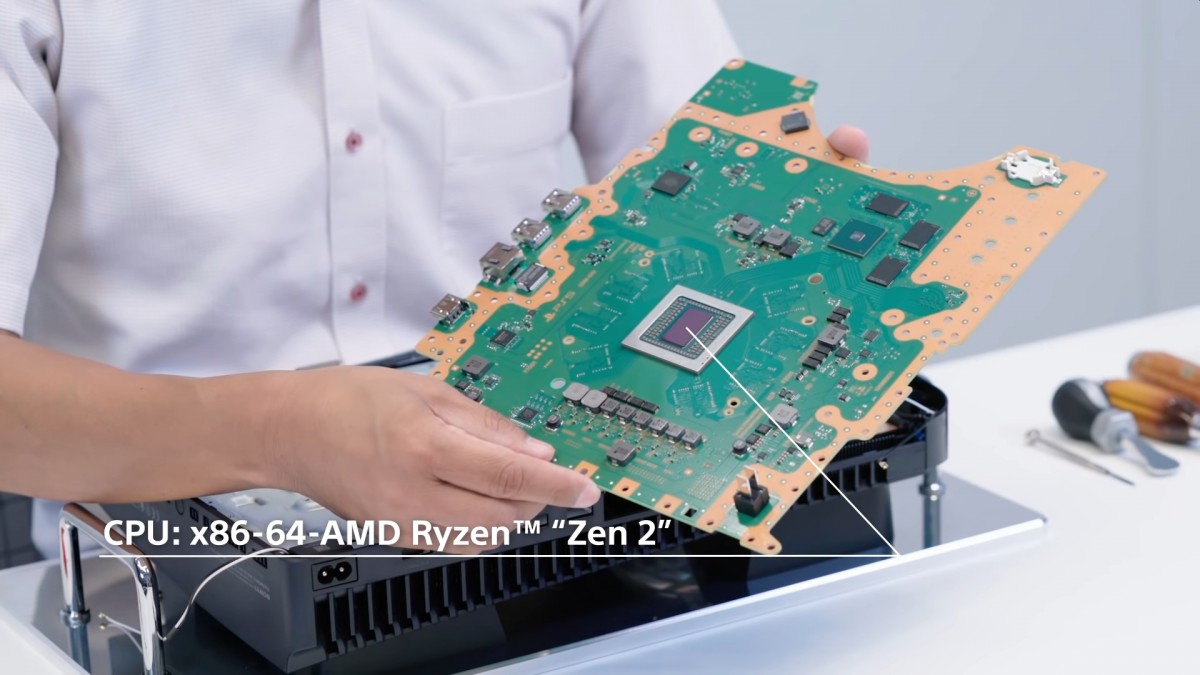 Ootori goes through several things beyond this point but there are only two things that really stand out, the size of the internal heatsink and the fact that Sony is using liquid metal as its TIM.

The PlayStation 5 has a massive heatsink that is roughly the same size as what you'd find on a premium aftermarket graphics card. It is roughly 75% the height and width of the console, which we saw is pretty large. Ootori says that the shape and airflow pattern of the heatsink allows it to have the same heat dissipation abilities of a vapor chamber. 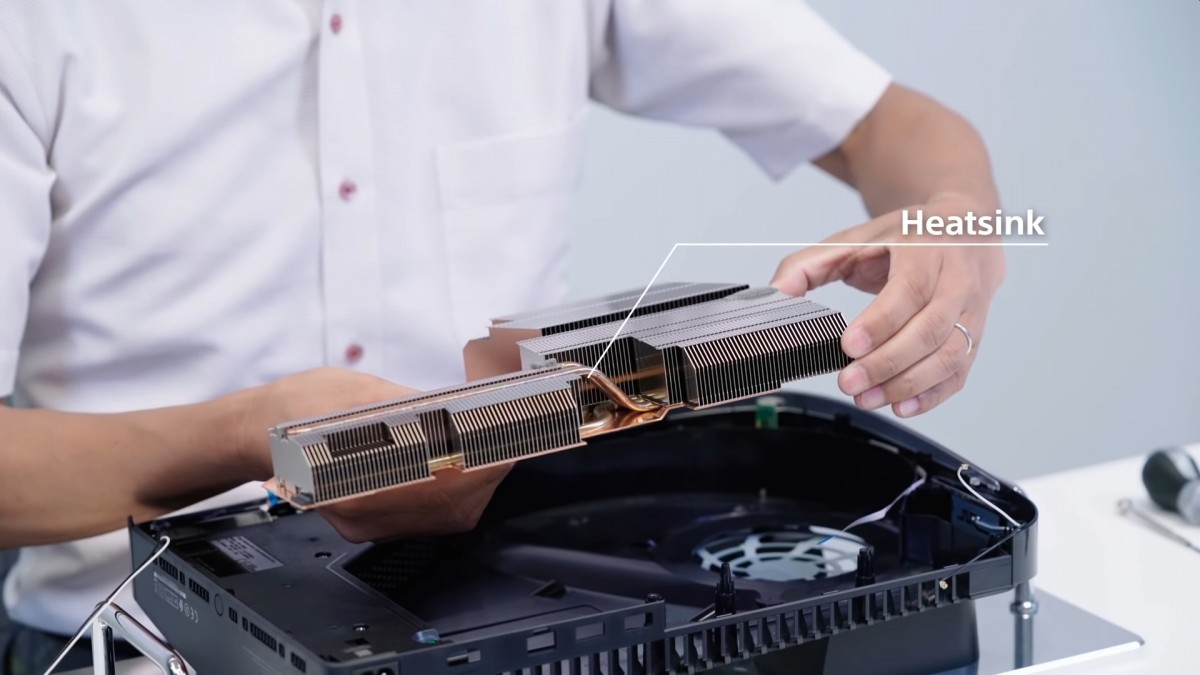 For comparison, the Xbox Series X has a much smaller heat sink. It is, however, a vapor chamber design. Having said that, vapor chambers aren't necessarily vastly superior than standard heatsinks and a sufficiently large heatsink can overcome the small benefits that the vapor chamber design offers. 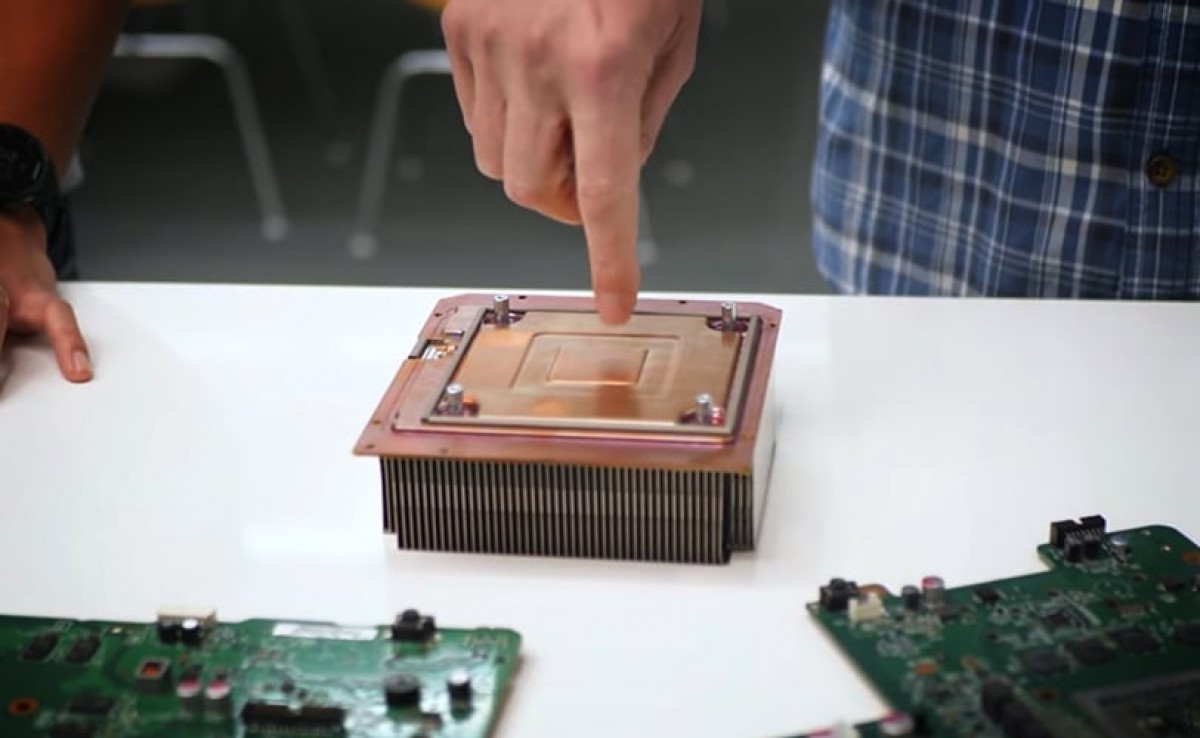 The other major thing about with the PlayStation 5 design is the use of liquid metal. Liquid metal is an alloy made from metals like gallium and indium and is in liquid state at room temperatures. Liquid metal is known to have high thermal conductivity, making it ideal for TIM (thermal interface material), which is the material that sits between the hot component (in this case, the processor) and the heatsink. 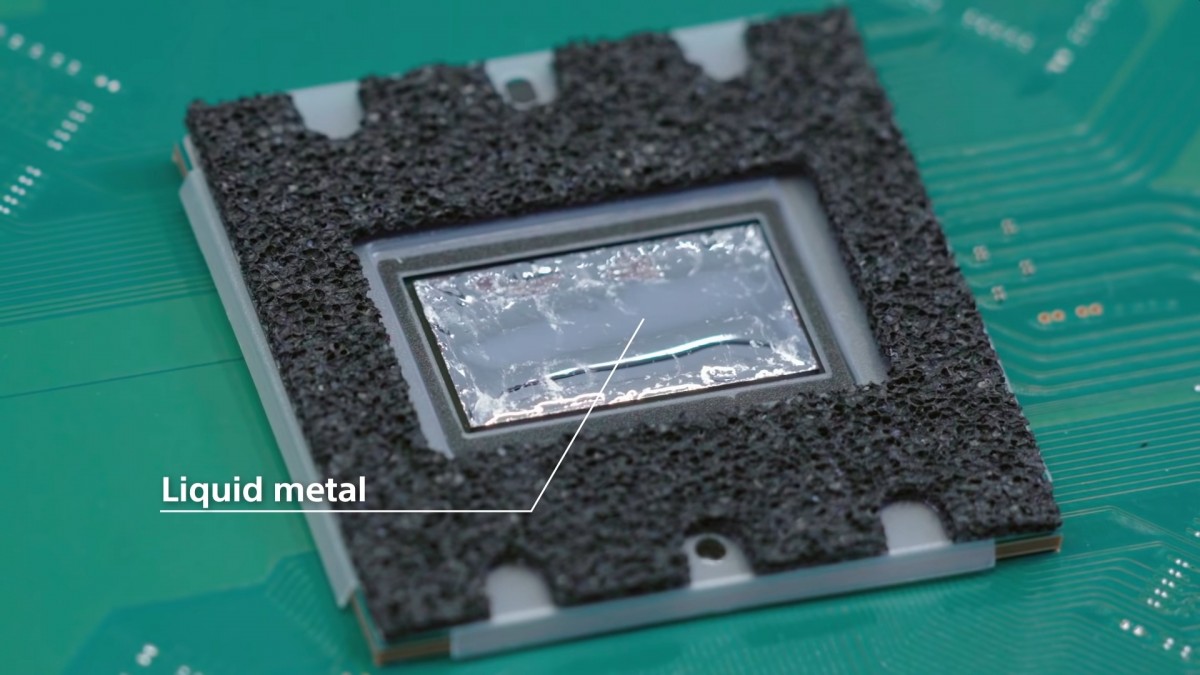 Normally, manufacturers use thermal pastes, which aren't as thermally conductive or long lasting as liquid metal but are easier to apply and cheaper. Liquid metal is also extremely electrically conductive unlike thermal paste, so it needs to be contained properly and not be allowed to run around the board. You will see in the image above that Sony has placed a foam padding around the chipset to reduce the likelihood of the liquid metal escaping.

It is remarkable to see a manufacturer use liquid metal in a mainstream machine. Liquid metal has traditionally been used by PC overclocking enthusiasts to eke out every last MHz of performance out of their processors and by manufacturers of high-end devices. The finicky application process, high cost, and risk of electrical conduction makes it not particularly suitable for mass produced devices. However, Sony is clearly leaving no stone unturned with the PlayStation 5.

We learn three things from this teardown. The first is that Sony's attention to detail continues to be high. Things like the slot for the screw in the stand, the little plug to cover the screw hole, and the holes to vacuum the dust all point to a well-thought-out and well-engineered design. 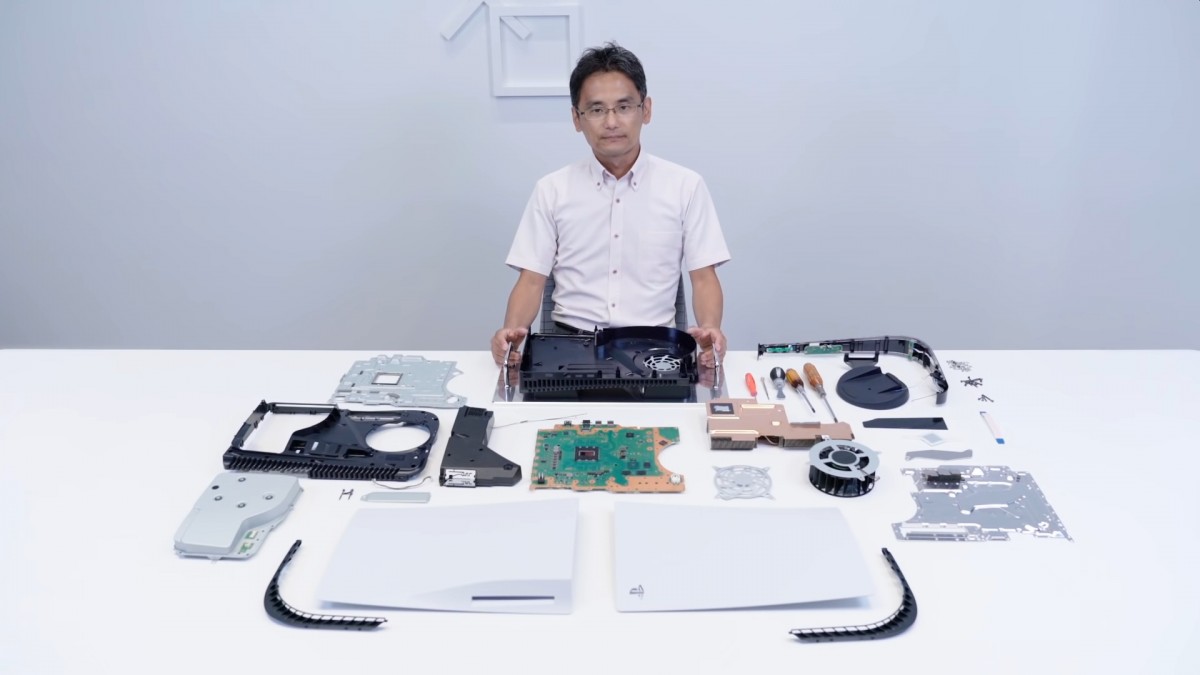 The second thing is that the PlayStation 5 gives better access to the user for things like replacing the storage or cleaning the insides than something like the Xbox Series X. It would have been extremely easy for Sony to come up with a proprietary storage solution citing bandwidth needs but they stuck with standardized solutions and that's good to see.

The third is focus on cooling and long-term reliability. The console is massive because it has a massive heatsink inside cooled by a large fan. They are also using liquid metal to draw as much heat away from the processor as possible. They made it easy to remove the dust so it doesn't accumulate and overheat the machine over time. The engineering here was not done to make the machine as compact and attractive as possible but to make it as practical and reliable while getting as much performance out of it as possible.

The PlayStation 5 starts at $399 and will be available starting November 12.

Sony PlayStation 5 could be the heaviest console around

No, they remade it from scratch. The build it from entirely ground and up, no reuse of the old game. Try to read about it and watch some gameplay from the game, it looks breathtaking.