LG announced a special-edition Optimus Black, featuring artwork by artists from the Keith Haring Foundation. The artwork will be in the recognizable style of the famous pop artist. His work has been featured on various LG products before and LG hopes this will bring his work to new audiences.

This is the second time that LG is collaborating with the Keith Haring Foundation (the LG KF600 and LG KF700 came out in 2008). The LG Optimus Black is a high profile phone and this special edition is a big deal to them. 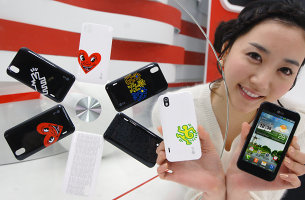 The LG Optimus Black is very slender, measuring 9.2mm thickness on average, and flaunts the new NOVA display, which cuts down energy consumption by 50%, while displaying better white colors than traditional displays (so LG says).

The Optimus Black press release also threw a reception-related jab at the iPhone 4 touting an antenna design that's free of any physical interferences, but we won't go into that.

on the right track. lg knows where they can grab the opportunity. I like this movement... and I really want to see real NOVA display

But is it dual-core?