Just days after it received Bluetooth certification from the Bluetooth Special Interest Group (SIG), the Samsung smartphone carrying model number SM-510F - alleged to be the successor to last year's Galaxy A5 smartphone - has now shown up on GFXBench. 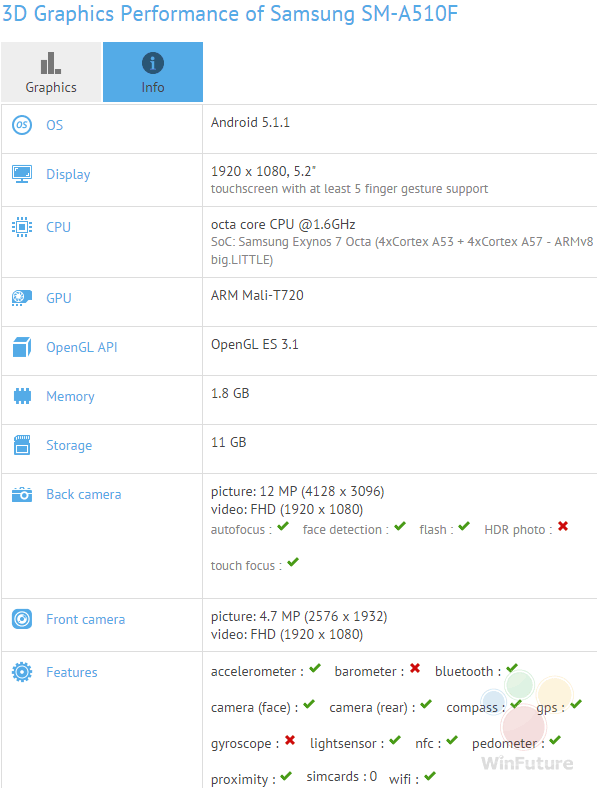 The GFXBench listing of the handset reveals that it is powered by Samsung's Exynos 7 Octa SoC with four Cortex-A57 cores and four Cortex-A53 cores that are clocked at 1.6 GHz, and sports a 5.2-inch screen with 1080 x 1920 pixels resolution.

It has 2GB RAM, and internal memory should be 16GB. In terms of camera, the SM-510F features a 13MP rear unit and a 5MP front shooter. It runs Android 5.1.1 Lollipop, while connectivity options include Bluetooth, GPS, WiFi, and NFC.

Samsung Galaxy Fold also gets Android 11 and One UI 3

Using a Galaxy J5, the same phone internally as A5, minus the light sensor, plus the replacable battery. Had an opportunity to have an S6 in my hand, that is a hair faster. J5, and A5 are wery snappy where it counts - opening contacts, messanger ...

If it has memory expansion also, will be a fantastic midrange phone