Strategy Analytics published its quarterly report on the smartphone revenue between October and December 2017. According to the data, Apple snatched $61.4 billion or 51% of the total $120.2 billion. Second came Samsung with $18.9 billion with a share of 15.7%, while third was Huawei with $8.4 billion revenue or 7% of the pie.

Morgan Stanley also published a research note for the same period, stating the iPhone market in China grew 12% on a quarterly basis. 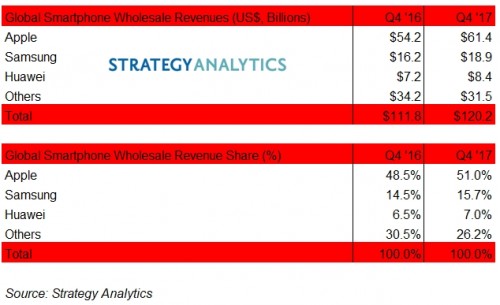 The Cupertino company managed to rake in three times more revenue than the next best manufacturer due to iPhone’s average selling price of about $800. This is way higher than the global average of $300 for Q4 2017 - a massive 15% jump from $255 in Q4 2016. The smartphone industry has managed to increase pricing and revenues despite a decrease in volumes.

Samsung sales of Galaxy Note8 and Galaxy S8 models and fewer low-end sales kept a high average price of $254, while the median price for a Huawei smartphone sits at $205 because of its strength on the domestic market. Woody Oh, Strategy Analytics Director predicts the Chinese company will improve once it manages to join the US market, a step that is currently blocked by US Senate. 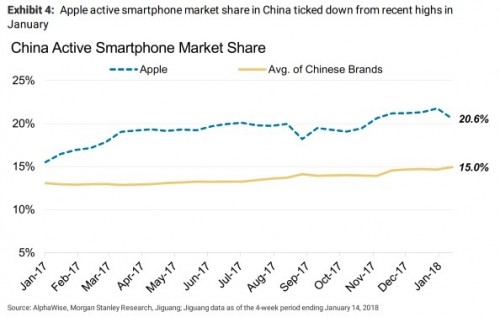 Morgan Stanley pointed out that Chinese users who buy iPhones are mostly loyal Apple fans. Android users would choose Chinese companies’ devices like Oppo and Huawei over older iPhones. Number-wise, over 3% of active installed phones are iPhone X, where the iPhone 8 Plus accounts for 2.63% and iPhone 8 has a 1.36% market share.

Market share is less than 15% but profit more than 50% that means we can figure it out how much over priced.

Nope i am from Slovakia we are so small country we dont need that gadget. Just 5,5 million of people in country so small that it takes about 200km from south to north border and about 470 from east to west border. Just that small. And i am luck...

It takes but 1 example where a claim does not hold to disprove the claim. Phones (several examples have been provided) that are on sale in the United States are necessarily not banned. Attempts to move the goalposts are pointless, you've been prov...