Symphony roar A50 - first Android One phone outside India

Android One has been steadily gaining speed ever since its initial announcement at Google I/O 2014. The exciting program represents the California tech giant's strive to rapidly advance in emerging smartphone markets, starting with India, by offering entry-level handsets with software support and up-to-date Android versions.

This is a challenge to say the least, even for the likes of Google, but the endeavor showed results this September, with the launch of three Android One devices.

This is a monumental achievement and represents a major step forward for the ever-growing India consumer base. But it comes as no surprise that well-supported, budget, stock Android devices have a universal appeal, as is evident by the success of the Motorola Moto G and Moto E in various European markets.

The latest development in the spread of Android One smartphones comes from Symphony Mobile, who has made the Symphony roar A50, a device bearing the Android One specs, available through its website. The handset is prices at BDT 8700, or about $112, which is definitely in the budget range. The website seems to be having some trouble with the shopping functionality at the moment and we can't definitely confirm availability and delivery terms, but one thing is certain - there is movement on the Android One front. 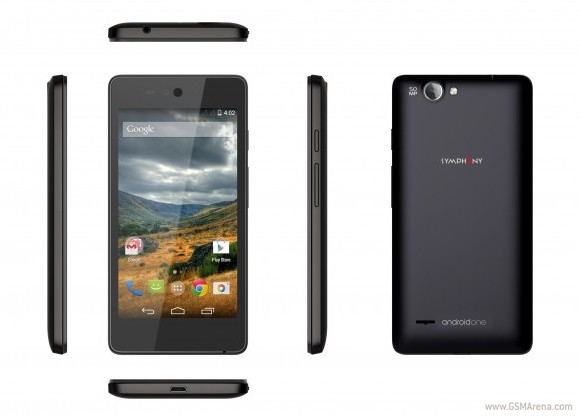 The Symphony roar A50 has mostly the same specs as other Android one phones, like the Karbon Sparkle V, Micromax Canvas A1, and Spice Dream UNO.

They are all based on Google's reference design and have a 4.5-inch, 854x480 resolution IPS display, MediaTek MT6582 SoC with 1.3GHz quad-core Cortex-A7 CPU and Mali 400 MP2 GPU, 1GB RAM, 5 megapixel rear camera, 2 megapixel front camera, FM radio, dual SIM support. The new device does bear some minor improvements over the aforementioned three, namely that it has 8GB ROM, instead of 4 and a slightly larger battery at 1,780 mAh instead of 1,700 mAh.

As we mentioned last week this is only one of many steps to come towards expanding Android One to new Asia markets, like Bangladesh, Nepal, and Sri Lanka. Those countries are all set to receive the initial array of three devices with Bangladesh apparently receiving the Symphony roar A50 as well. No official statement is available yet as to whether or when Android One will spread to US and European markets. It is a fact that the Karbonn Sparkle V is available through Amazon UK, but for the rather steep £123.51. All we can do is wait and see if Google goes the extra mile and decides to take on international supply challenges for the exciting and affordable Android One lineup.

Google Pixel 6a renders suggest compact midranger in the works

nice phone but i have not use

Is it upgrade to Android 7 ?