Tag Heuer Connected is back, costs like a true Swiss luxury watch

Tag Heuer updated its Android Wear-powered watch, the Connected, and the price now properly reflects its luxury status - a wallet-shrinking $9,900. That’s a long way off the $1,500 of the original and the design hasn’t changed much.

Let’s talk specs first. The watch has a 46mm Titanium Grade 2 casing (12.8mm thick), lugs and push button. The titanium has been coated with carbide and a anti-fingerprint coating. The glass is scratch-resistant sapphire and the whole watch is IP67 rated - waterproof up to a meter for half an hour (not really a swimmer’s watch, but protected from the elements). 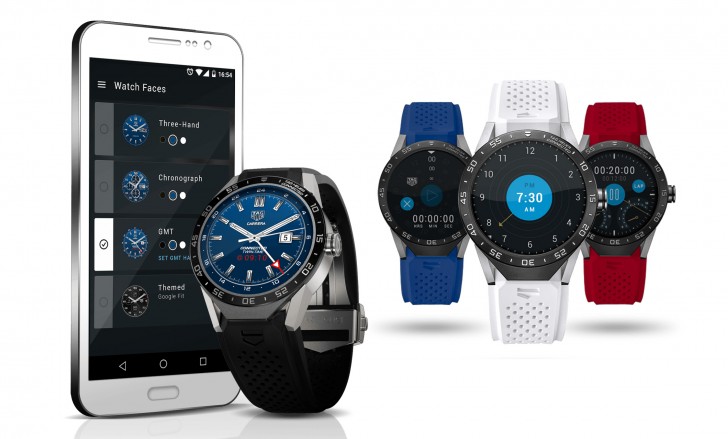 The default band is a light (29g) vulcanized rubber band, but you can switch to titanium or calfskin leather if you prefer. With the rubber band, the whole watch weighs just 81g.

On the geekier side of things, the Tag Heuer Connected has a big 1.5” circle display with 360 x 360px resolution (240ppi). It’s a transflective display, which should help its visibility in direct sunlight. The watch is running on Intel’s wearable platform with a dual-core processor (0.5GHz normal, 1.6GHz top speed), 1GB of RAM and 4GB storage. As other Android Wear watches, this one supports Android 4.3+ and iOS 8.2+.

The 410mAh battery promises 25 hours of normal operation. The sensor array includes a gyroscope, a tilt sensor, a microphone, but lacks a heart rate monitor.

As before, after two years of Tag Heuer Connected ownership you get the opportunity to pay $1,500 and get a mechanical Carrera watch (which normally runs around $3,000). That watch will last for decades, long after the Connected is outdated. Though to be fair, you had the same option with the original $1,500.

It is extraordinery how ignorant some people are. The $1500 Connected is a value proposition cause you can exchange it with a mechanical one in 2018 paying only the difference. So if you want in the end a mechanical Tag you have the opportunity to us...

I actually baught 2 of this watch but unfortunately it made in china but atleast I have the most expensive FAKE SWISS WATCH hahaha you want it ? just pm me for more details