As you might already know, Gionee is rumored to unveil the M6 and M6 Plus smartphones on July 26. While the key specs of the M6 are already known (thanks to TENAA), the M6 Plus has been a complete mystery.

Well, that was until now, as the Chinese firm has outed a teaser image for the Plus variant that reveals a mammoth 6,020mAh battery for the device. 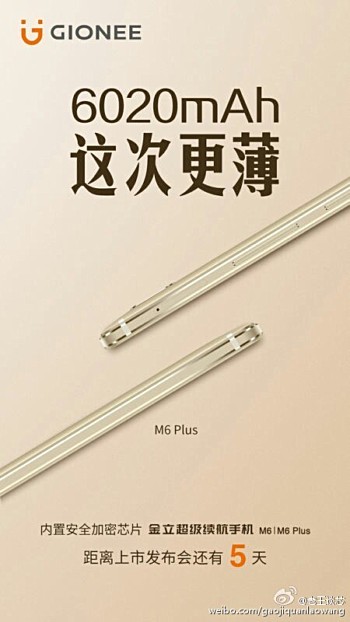 This, however, shouldn't come as a big surprise given that the standard M6 too packs a massive 5,000mAh battery. Sadly, nothing else about the Plus model was revealed by the company.

As for the M6, it is powered by a Snapdragon 652 chipset and sports a 5.5" AMOLED screen of 1080p resolution. RAM is 4GB, while internal memory is 32GB (non-expandable). In terms of camera, the phone features 13MP/8MP combo. It runs Android 6.0 Marshmallow out of the box.

Bought a xiaomi redmi note 3 pro 32gb a few months back, am using it as a daily and most people look at me weird for buying a phone from china without warranty and with a pinkish see trough case. Paid 250eur including taxes at the time. Considering i...