Tecno introduced three Camon 16 phones earlier this month – all of them high-fliers with a Helio G-series chipsets. An entry-level device will be added to the series soon and the Google Play Console has the first details. 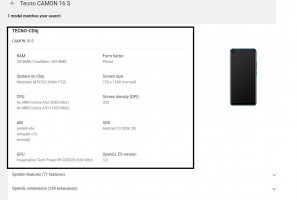 The display has 720 x 1,600 px resolution – that’s the maximum supported by the chipset. From the included image (which isn’t always 100% reliable), we see that the phone has a single punch hole camera in the upper left. Interestingly, there appears to be a front-facing LED flash in the top bezel (but again, these pics aren’t very reliable).

Still, the display is a far cry from Camon 16 Premiere’s 90 Hz display with 1080p resolution. The Premiere is pretty costly, however, it goes for KES 29,000 in Kenya (where it made its debut). That works out to $275 or so, depending on currency exchange rates.

Tecno Camon 16 Premier in for review

Their obsession with Helio P22 🤮

these guys are obsessed with hd displays 👎