The highlight of the Tecno Camon 18 Pro is its triple camera on the back. It features a 64MP primary camera, a 12MP ultrawide shooter with gimbal stabilization and an 8MP tele snapper with a periscopic lens for 5x optical zoom. There is also a 4-LED flash. Impressive, indeed. 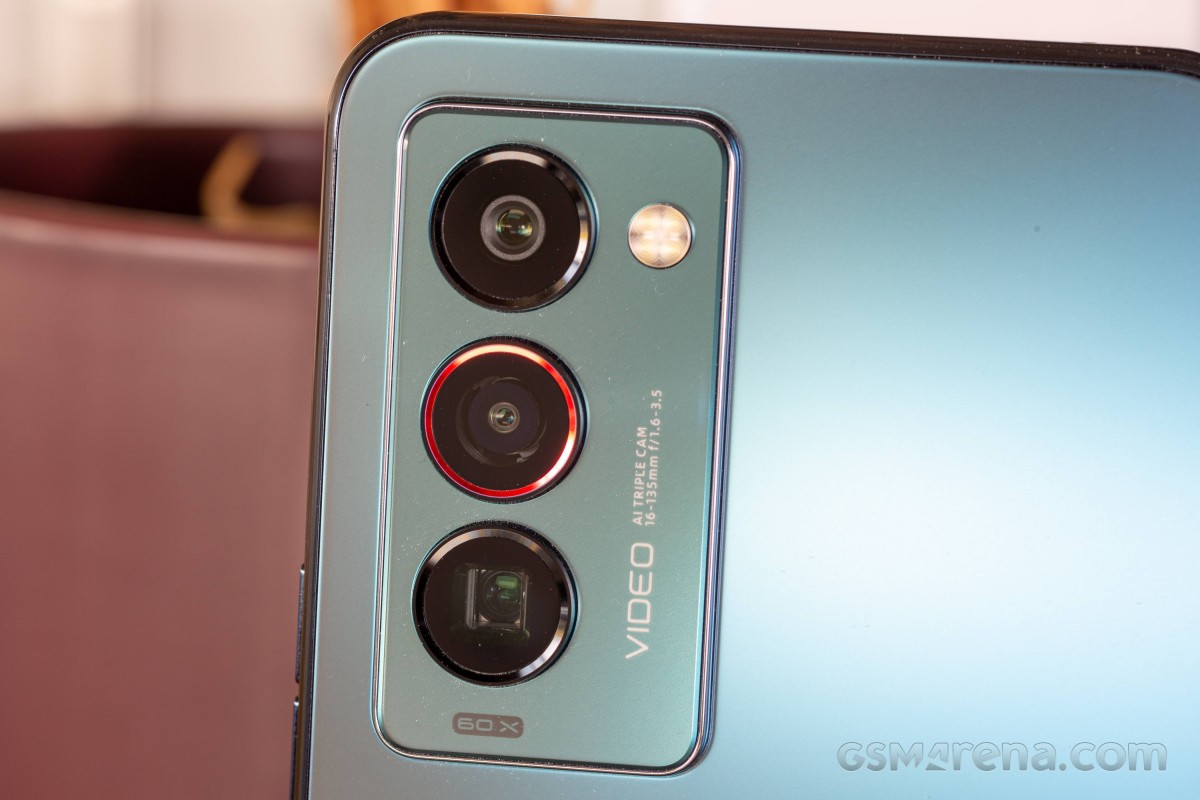 The primary camera uses a 64MP Samsung S5KGW1 sensor - a 1/1.72" Tetrapixel imager with 0.8µm pixels. The lens in front has an f/1.6 aperture as per Tecno specs (or f/1.89 as per EXIF data) and a focal length around the 26mm mark. There is no OIS here, while PDAF is available.

The telephoto camera utilizes an 8MP OmniVision OV08A10 1/4.4" sensor with 1.0µm pixels and f/23.4 135mm periscopic lens. Both OIS and PDAF are available. This camera provides a 5x optical zoom.

Over on the front, the Camon 18 premier has a 32MP camera for selfies - it uses Samsung's ISOCELL S5KGD2 (same as on Galaxy A52s) - it's a 1/3.4" sensor with 0.8µm pixels and Tetracell color filter. This camera has 28mm-ish f/2.45 lens, and the focus is fixed at infinity. This snapper saves 8MP images by default - as it should be.

The camera app is straightforward - aside from the full-auto photo mode being called AI Cam, things are mostly as expected. You can swipe down on the viewfinder to bring the top row of icons closer - something Techno calls one-handed mode. Night Mode is available only on the main camera. There is Super Moon mode if you are interested. But there is no Manual/Pro mode, unfortunately.

In Film mode, you have different presets for short videos. Bokeh mode is available in Video mode if that's your thing.

The default 16MP photos from the primary camera are alright - their contrast is good, the noise is low, while the colors stay true to reality. The images aren't as over-sharpened as on other phones and retain a bit more natural look. The corners are as sharp as the rest of the image, which is good, too. The dynamic range is commendable on most occasions (Auto HDR was on by default).

The photos exhibit average detail, and we somewhat expected more. Sometimes the exposure tweaking may go terribly wrong, and you can end up with a super bright and blown photo (like the castle). It happens even if not that often, and we couldn't do anything about that. So, while the Auto HDR may be handling demanding scenes well, prepare for some less than stellar results.

There is a 64MP mode available (called Ultra HD), and it saves detailed enough photos, with excellent colors and good contrast. The dynamic range is mostly good, too. Sure, it's a Tetracell camera, so artifacts are expected, but there is a case for shooting in Ultra HD mode.

First, this is the way you can get 2x lossless zoom - just crop the 16MP center out of the 64MP images.

Second, and most importantly, if you downsize the 64MP photos to 16MP, you will get impressive shots - sharp with previously invisible detail, with a balanced unprocessed look. In fact, if you are after outstanding photo quality - this is the way.

And here are some downscaled photos if you'd like to compare the results with the default ones.

While the 12MP ultrawide camera features a 16mm lens, you get different ultrawide-angle results since it's a 16:9 shooter. The 4:3 center of these photos is similar to what you'd get with the primary camera, with the ultra-wide benefit being the extra stuff you fit in the 16:9 frame.

Here is a quick illustration - we shot this scene with the two cameras - the darker patch in the center represents the viewport of the main camera, while outside of it, you see the limited extra field of view provided by the ultrawide camera. It's wide, alright, just not the ultra wide. 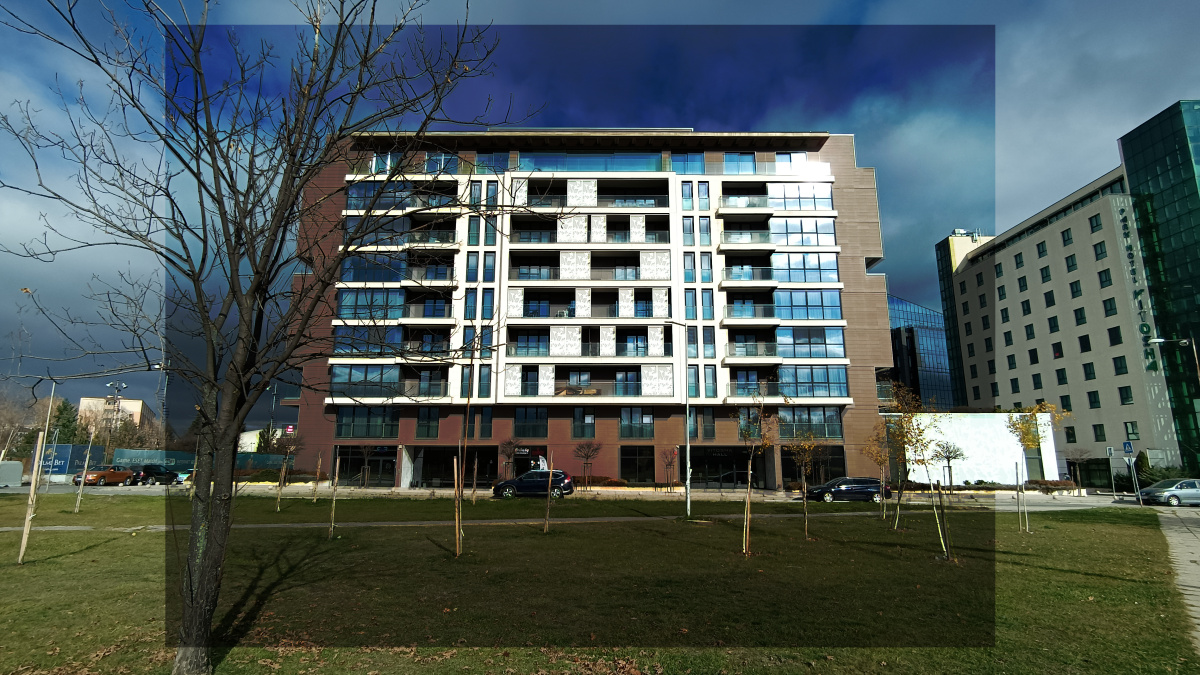 So, the 12MP photos from the ultrawide camera come out with accurate colors, good contrast, and well-handled noise. The dynamic range is excellent on most occasions, though misfires with the exposure are possible here as well.

Unfortunately, the resolved detail is rather low, and the photos are soft, especially outside the center. the automatic barrel distortion fix is probably part of the issue in the corners, but there is no excuse for the rest - the sensor has large pixels, and we did expect more detail than this soft mess.

On a positive note, the images look good on the phone's screen and on the social networks as they are usually downscaled during the upload.

We liked the 8MP zoomed photos a lot - the 5x optical magnification can be a real helper during the day, and this camera can capture otherwise impossible to shoot stuff. The images are detailed enough with gentle noise reduction (hence more detail, but also more noise), the colors are accurate, and the contrast is great. The dynamic range is also rather wide most of the time.

You can shoot portraits with the primary camera, and those turned up good - the 16MP shots present detailed subjects, proficiently separated from the background. Contrast is good, though not great, and the blur could benefit from some further adjustments.

The 16MP low-light images from the primary camera are in line with what we've seen from similar shooters. The resolved detail is okay, though some of it was eaten by the aggressive noise reduction. Noise is still present here and there, but not that intrusive.

The color saturation is good and stays true to life. The highlights are often clipped, while the shadows are more underdeveloped than expected.

Overall, while the photo quality is a bit of a mixed bag, but it's okay.

Super Night mode is available only on this camera, and it's, well, absurdly unnatural. It takes about 3 seconds and turns the night into day. The photos are punchier, and the highlights are restored, but there are all sorts of visible artifacts, and the contrast is visibly lower.

This is one of the weirdest looking night mode photos we've seen in a while and won't be everyone's cup of tea for sure.

If you need to turn your pitch-black night into a day, the Super Night is definitely the mode to use and here is an example.

The ultrawide photos at night are good as far as colors, contrast and realistic looks are concerned. These could be class-leading, but their detail is extremely low, hurt by the overly aggressive noise reduction and poor processing algorithms. And since there is no Super Night for this camera, we suggest using the main snapper.

The low-light ultrawide photos are best looked out-zoomed or downscaled to, say, 1MP. Such a missed opportunity with this great sensor and gimbal stabilization...

You shouldn't use the zoom camera at night unless it's a pretty bright scene. If there is enough light, you'd get a noisy but detailed photo with good colors. Otherwise, it will be a blurry image with a ton of noise and nothing to see.

Finally, there is a Super Moon mode, which we tried as well. It uses the telephoto camera and works after you zoom beyond 25x. Basically, the software tries to read the moon's shape and texture and then enhance it artificially. And it works okay if you don't expect anything beyond an enhanced digitally zoomed Moon.

And here are photos of our usual posters taken with the Tecno Camon 18 Premier. You can see how it stacks up against the competition. Feel free to browse around and pit it against other phones from our extensive database. 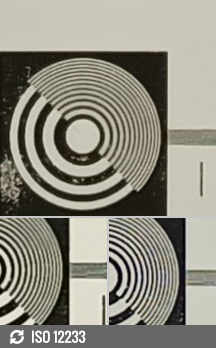 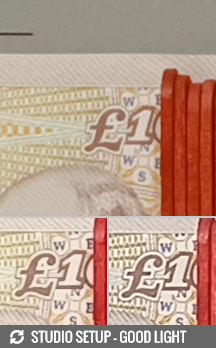 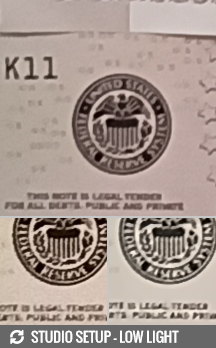 The selfie camera saves 8MP, and we are so happy with that decision; it's a Quad-Bayer snapper, after all. And those are particularly good - sharp, with a ton of resolved detail, accurate colors, and high contrast. The dynamic range is okay, too.

There is some sort of beatification at play, 'thanks' to the AI camera, and we couldn't turn that off. It's not that intrusive, though, so it's not a major issue.

The portrait selfies turned out good, too. They are detailed and colorful, with acceptable subject separation, though the faux bokeh could use some improvements.

The video capturing on the Tecno Camon 18 Premier is a bit weird and somewhat disappointing given the high-end camera kit at the back.

The video resolution for the main camera maxes out at 2560x1440 (1440p), while all other snappers are limited to 1080p@30fps. We really can't see a good reason why that is the case since, theoretically, both the camera sensor(s) and the Helio G96 chipset should be capable of 4K@30fps capture.

The videos 1440p videos have a solid 50 Mbps bitrate at right around 30fps. The 1080p clips also look promising with a 20Mbps bitrate. Audio is captured stereo with 256Kbps.

The 1440p footage from the main camera is quite good - the picture is sharp and detailed, the colors are accurate, and the contrast is high. The dynamic range is average, but that's fine, too.

Tecno has gone a bit overboard with the sharpening, and the videos will be better with a bit gentle approach.

The audio is poor, though - it's like one of the channels is almost entirely missing, and the quality sounds low with compression-like artifacts.

The 1080p clips from the ultrawide camera are okay, though not great. They also show accurate colors and are nicely contrasty, but the resolved detail is average, and the sharpening is excessive. The dynamic range is okay for such a type of camera.

The Full HD videos from the zoom camera are easily likable - they show you what's far away with great detail and good colors. The contrast is not stellar though, just like with photos.

The low-light videos are alright, too. The ones from the main camera benefit from a gentle noise reduction, and while noisy, they are also sharp and detailed, with good color saturation and satisfying exposure.

The ultrawide camera, thanks to its gimbal stabilization, also produces usable night videos with good colors, though darker because of the f/2.2 lens. Here the noise reduction is on the other end - aggressive - and it smears more fine detail than we would have liked.

The Camera app has this additional Film mode, which contains a few different video presets. This is like an automatic video editor - you choose the theme, then manually press the capture button six times (each step records about 3s of footage), and everything is stitched together. We used Vintage and Street for the samples we shot (these come at 2,400 x 1,080px resolution).

There is no electronic stabilization, so the videos from the main camera are as shaky as expected, while the others are stabilized well, but abrupt transitions do happen often.

There is a Super Stable mode, which is, in fact, electronic stabilization, but it works only on the ultrawide camera and makes use of both gimbal and software to make an action-like video. This is useful only if you are going to run after something as it compromises the video quality due to heavy cropping and upscaling.

Finally, here is the Tecno Camon 18 Premier in our video comparison database. 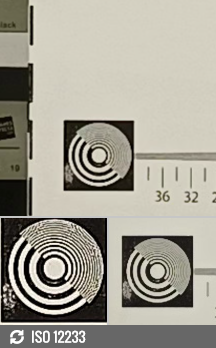 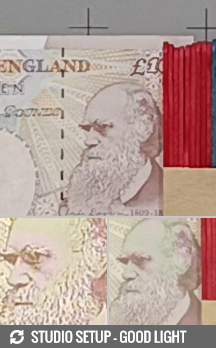 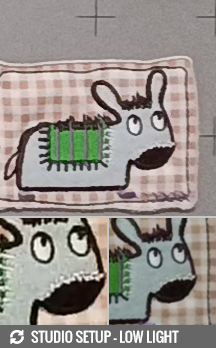 Pls how is the pictures

My Tecno camon 18 premier is not able to merge calls or make conference calls. Please I need urgent support

My Tecno camon 18 premier is not able to merge calls or make conference calls. Please I need urgent support