Tecno definitely hasn't cut any corners when it comes to the build quality and has tried to distinguish its device from the rest by introducing key design changes to the standard glass sandwich formula.

The most noticeable design feature would definitely be the back. It has a textured surface and is (probably) made of Gorilla Glass 5 - Tecno's sources don't align completely on that.

The texture itself isn't anything out of the ordinary - it's just thin straight lines coming down from the top of the device. This surface is supposed to provide a better grip and eliminate smudges. 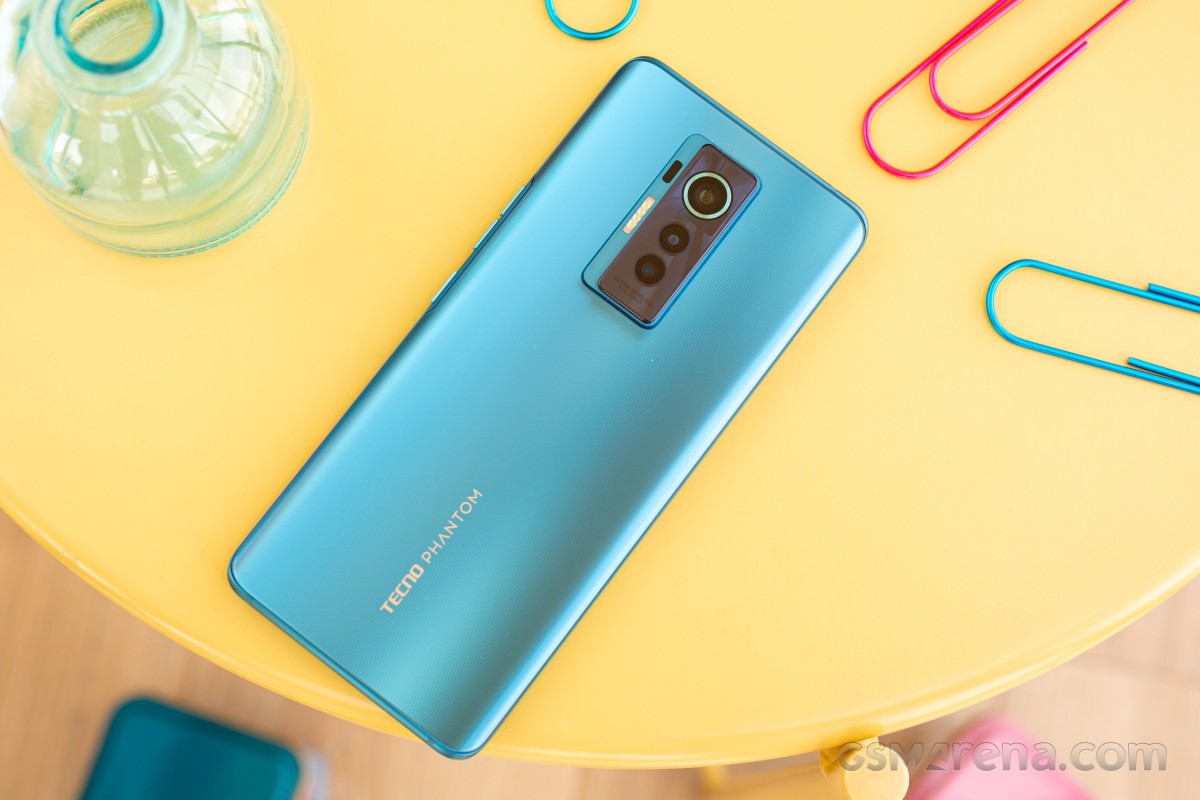 Unfortunately, we don't feel a more secure grip than your normal glass back, but fingerprints and smudges are a lot less visible, we'd give it that. It's also slightly curved to the side, which helps with the grip. 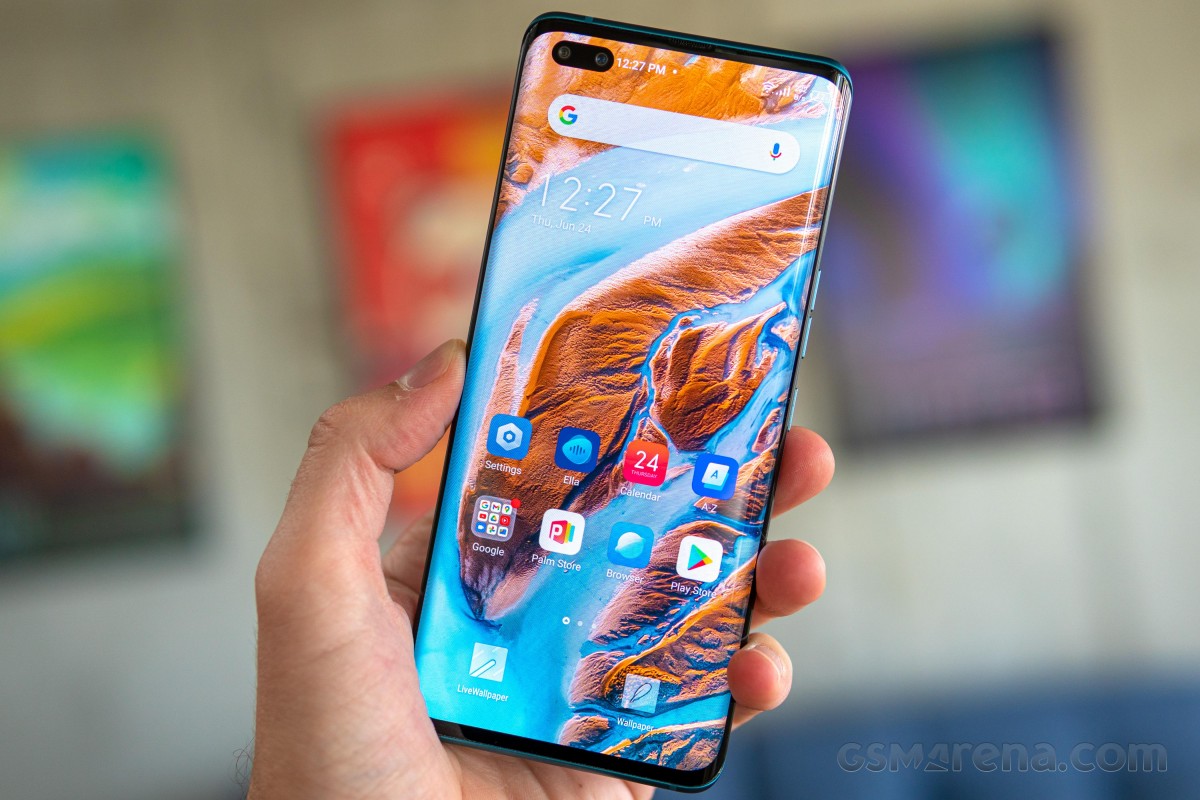 Another thing that stands out is the camera module. It has two levels, and the upper one protrudes a bit too much for its own good. The phone's body isn't exceptionally thin either, measuring 8.7mm of thickness, so it all adds up to a bulky camera module. You get the three camera sensors along with a big LED flash and laser aiding the autofocus. 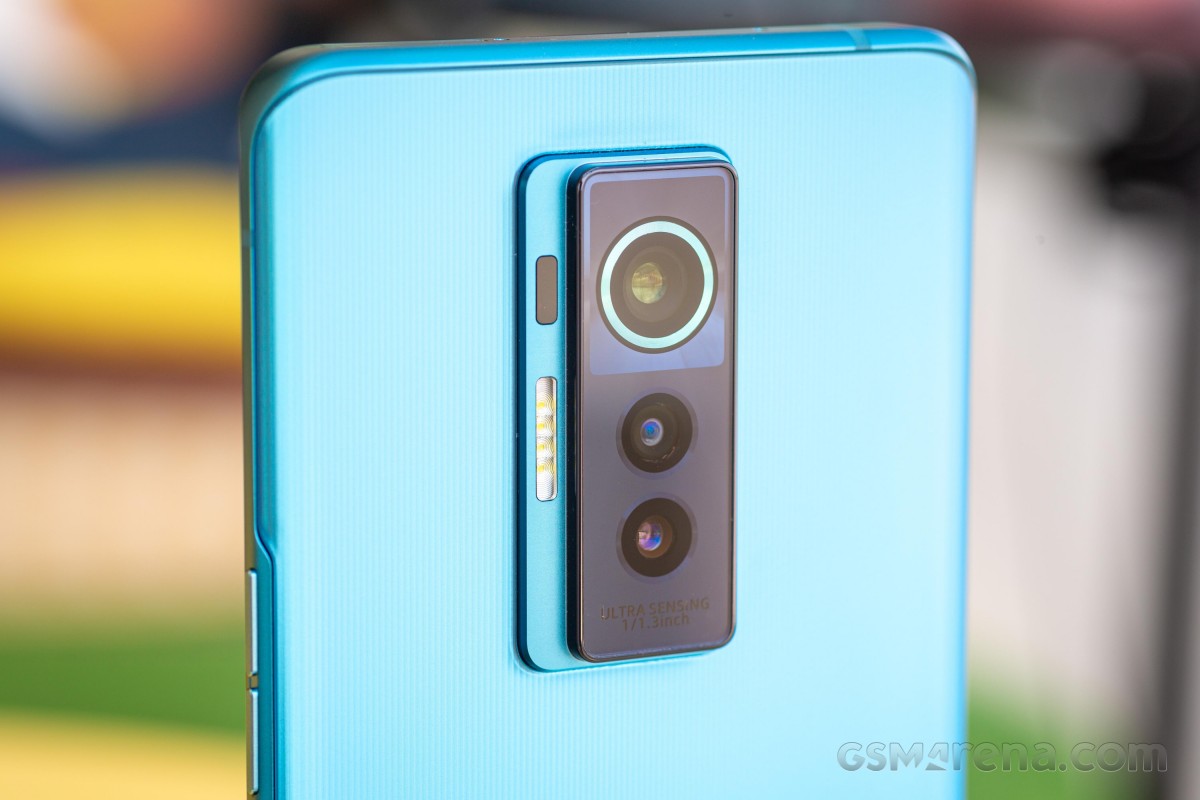 The front panel is protected by a curved Gorilla Glass 5 sheet, and although the bezels aren't the thinnest ones we've seen, they look pretty symmetrical. The top and bottom ones look almost identical to one another, while the side ones are a bit on the thick side. Luckily, the panel is curved, so they don't look as big. 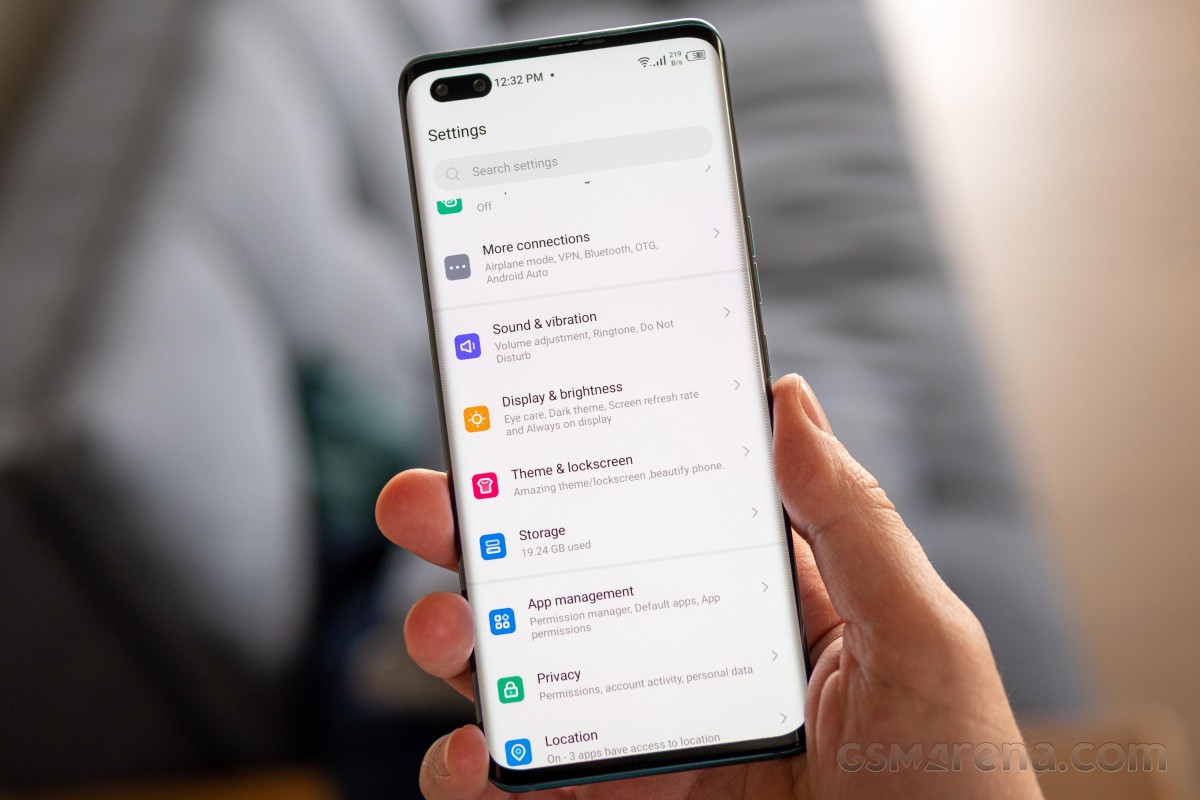 What looks big is the punch-hole for the front cameras. The distance between the two sensors is relatively big and eats away a significant chunk of the display. The cutout is placed a bit far from the side edge too, leaving little room for the icons and clock in the status bar. 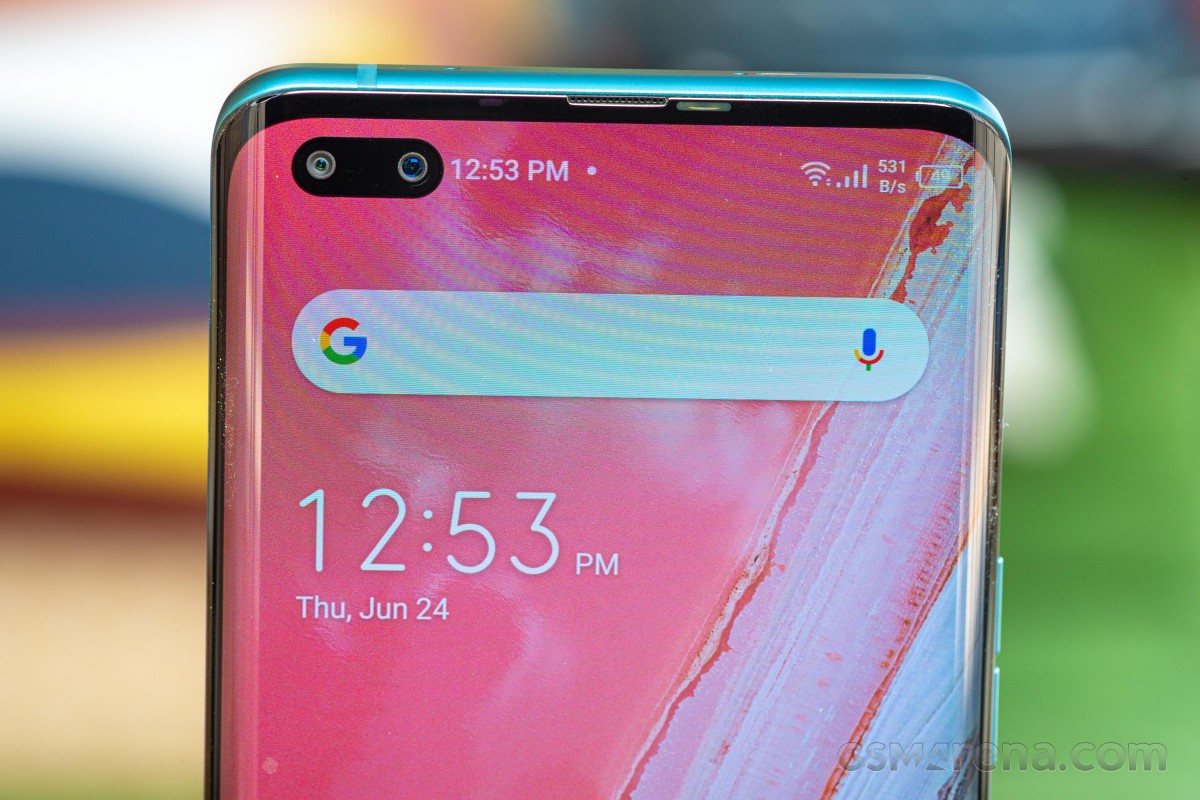 Onto the side frame, it's made of anodized aluminum, going well with the elegant blue color, which, by the way, is called Van Gogh Starry Night Blue. 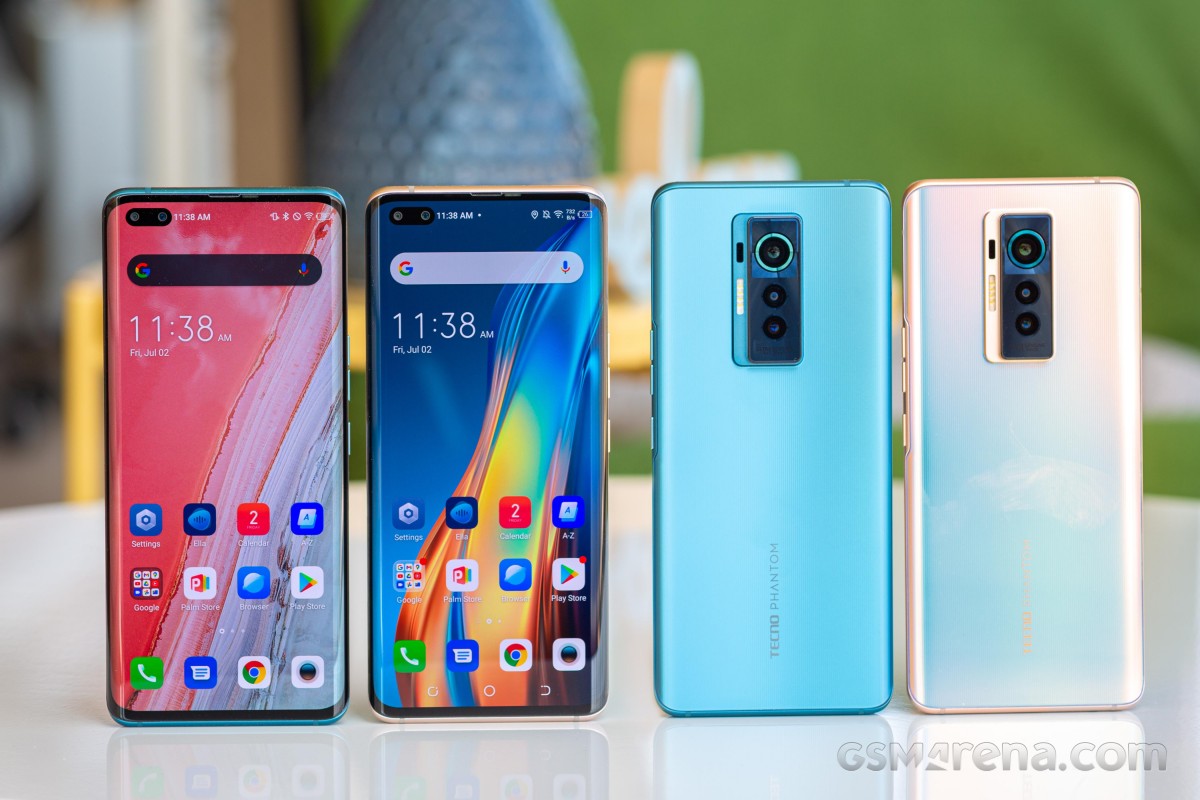 The frame on the side is so thin that it had to be widened around the buttons to accommodate them. Speaking of which, the power button and the volume keys are placed within a reasonable distance and are easily reached with your thumb.

As we mentioned, the back panel is made of glass (probably Gorilla Glass 5 just like the front).

Speaking of the back, here's the Van Gogh Starry Night Blue next to the Monet Summer, which is considerably more flashy with a fresh-looking gradient suitable for the hot summer, hence the name.

The bottom and top sides of the frame are flat with chamfered edges. The top makes room for the dual SIM card + microSD card tray while the bottom is business as usual - USB-C connector, loudspeaker grille, and the 3.5mm audio jack. 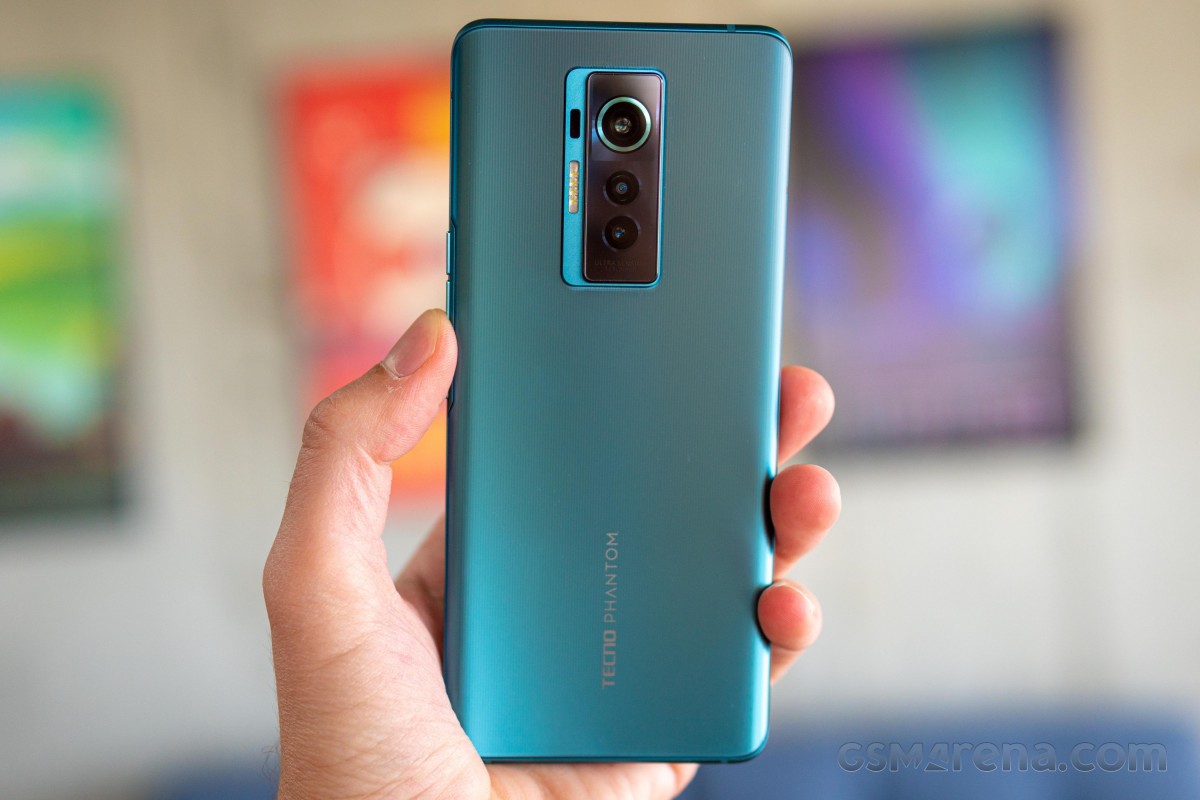 All in all, there's little to complain about. The build feels premium and solid, there are a couple of original design choices, the button placements are ideal (the same goes for the under-display fingerprint reader), and the patterned back is welcomed. Reminds us of the Huawei Mate 20 Pro to some extent. The only thing that feels a little too much is the cutout on the front for the selfie cameras. We get that it's necessary for the dual selfie camera setup, but we feel that it could have been at least a little smaller.

The phone is awesome

It's an amazing phone but I'm facing the overheat issue too. Did you find any solution?

Mine is up for sale. Rubbish camera. Can't even post my pictures on IG n the price is extremely high. Nonsense