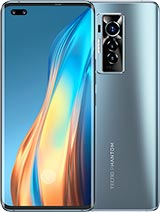 Hugely impressed with this phone.....except for the chipset.

I think the phone lies somewhere between mid-range and upper mid range. It's nowhere near premium. And the price should be looked out for

Why is it that tecno phones doesn't have nfc

Good but no NFC

Snapdragon 765 could have been more great on it

Good midrange specs, would love to feel this device before promoting it.

I mean if they, at Tecno, were going for an older Mediatek processor for their "flagship" phone, why not Dimensity 820?

But I suppose even the Xiaomi Redmi Note 10 pro and realme 8 Pro aren't 5G capable either. I reckon this Tecno phone could've done better in the market if it got released prior to the two. Tecno isn't as competitive as the two. It's charging with prices like Oppo and Vivo.

Finally a sizeable phone from tecno/infinix grp. Expect them to go even smaller that we consumers can at least think of to buy

Need to see it

All Tecno mobiles are good, only those mid-range mobiles should also have super amoled display .

"Hey why don't we put these pretty solid flagship specs on a phone then absolutely CRIPPLE it with a godawful chipset?" -Tecno

Like with their lower end phone priced at $334 you already know this is gonna be way more overpriced.