A couple of weeks ago Google shared an image picturing multiple Pixel 6 phones where they were showing the date “Tuesday 19” as in October 19. This was the first hint that the search giant will launch the new Pixels on that date next month.

This is now seemingly confirmed by an ad from Australian carrier Telstra, which is running on Facebook. It says “All-new Google Pixel 6 coming soon” and asks users to register interest in the launch for a chance to win a Marvel Stadium sports experience. 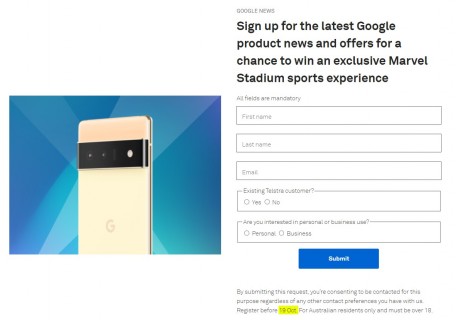 This offer ends on October 19 – chances are that this date is not a coincidence. It also contains some good news buried within. The Pixel 6 will be available in only a few countries and (judging by the ad) Australia is among them and it will probably be a simultaneous launch.

Well, it’s good news if you happen to live in one of those countries. Anyway, the ad points you to this page, which reiterates the October 19 date.

The Pixel 6 series pass through the FCC earlier today, which revealed that 3 out of the 6 SKUs have mmWave 5G support. Also, only 3 out of the 6 SKUs support UWB, but the overlap isn’t 100%. All six will have Wi-Fi 6E, however. Of course, few countries have active mmWave networks, which is the likely cause of the division.

Google's first Pixel 6 ad shows it in people's hands, giving us another look at the new design

The limited storage is for the on-line storage in Google Photos. Just like iCloud you have to pay to get more online storage. The full storage in the phone is available for whatever you want to use it for.

Nope. Photo storage on device is the same for any phone. Google Photos shares the 15gb free cloud allocation on your Google account. Though you can also sync the phone with Amazon photos, or any other cloud based solution. I just sync my ph...