The FCC has certified the Samsung Galaxy A50 and in doing that it revealed some key details. On the wireless side (FCC’s key competence) there’s Wi-Fi a/b/g/n/ac, Bluetooth 5.0 LE, ANT+ and LTE.

The Galaxy A50 has a 6.22” screen (with a waterdrop notch, the phone itself measures 158.5 x 74.5mm. The battery is sealed. The phone will come bundled with Samsung’s standard Adaptive Fast Charger, a USB cable and a wired headset (EHS61ASFWE).

From previous leaks we know that the Galaxy A50 will have a 4,000mAh battery and a triple camera on the back with a 24MP main module. It will use an Exynos 9610 chipset with 6GB of RAM.

The Galaxy A series has been home to premium mid-rangers so far, but that’s about to change – the Samsung Galaxy A20 has been spotted running Android Go. You can see its Geekbench score below.

This one has been through Geekbench too, showing an Exynos 7885 with 3GB of RAM and running the full Android 9 Pie. This model gets a higher benchmark score too, not surprising since two of its eight cores are Cortex-A73. 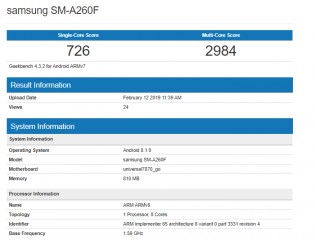 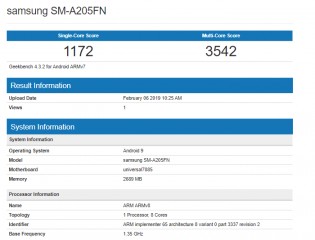 It will be interesting to see what kind of naming scheme Samsung will come up with to keep the A205FN and A260F separate as they are clearly very different in terms of capabilities. They can’t both be named “Galaxy A20”.

Samsung Galaxy A50 spotted with 6GB of RAM

If only the A20 will be as compact as LG Q7 but most likely, it will be another >6" phablet.