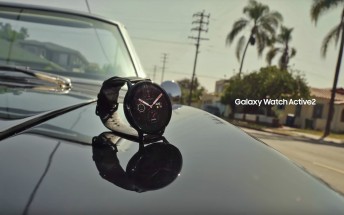 The first promo video for the Samsung Galaxy Watch Active2 stars LA chef Roy Choi. In addition to cooking, he’s a bit of an entrepreneur too – he runs five businesses, but instead of an office, he prefers to do everything from his phone or his watch. Better yet, he’s a fan of the series and previously wore the original Galaxy Watch Active.

Now check out the video to see how the Galaxy Watch Active2 helps him throughout his busy day. It’s not just calls and reminders, it gives him a nudge when he’s been sitting for too long and cheers him on during his runs. The ability to easily swap out the wrist bands comes in handy too as he moves from work in the kitchen to dressing up for a night out.

There’s also this video, which is a minute-long montage of Choi going about his day:

By the way, Jon Favreau’s firm Chef is loosely based on Roy Choi, who is one of the founders of the gourmet food truck movement.

Watch the Samsung Galaxy A50 get tortured on video

Nope, that's not how things works. The android ecosystem isn't growing much lately, but iPhone device sales are down around 20% year over year. What's worse is, Apple device sales has declined sharply the last couple years. Apple is trying to ...

And it will also make you realize that 20% of YOUR pjera move yo the apple ecosystem each year. The Galaxy watch active 2 is a worse product.