The Samsung Galaxy Fold has two screens, two batteries and six cameras, but you know what it doesn’t have? A 3.5mm headphone jack. That puts it on a very short list of Samsung smartphone in many years to not have a jack (the others being the Galaxy A8s and exotics like the W2019 clamshell). There’s no microSD slot either (it shares this trait with the Galaxy S10 5G).

Samsung kept the Fold away from the prying eyes of tech journalists and is very selective about showing the sides of the device. For example, most product shots don’t show the side-mounted capacitive fingerprint reader. 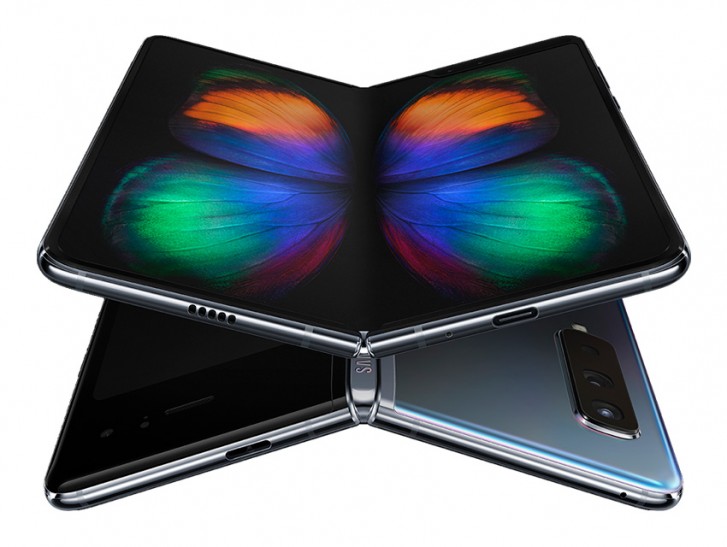 Finding an image of the top side of the device is even tougher, all we have is this. Starting from the top left and going clockwise, there’s the loudspeaker, the USB-C port, an extra mic and... it’s not entirely clear what the hole in the bottom left is.

It’s on the half that houses the external screen. That half also holds the SIM tray while the other half is home to the volume rocker, power key and the fingerprint reader.

The Samsung Galaxy Fold will be available for consumers from April 26 in the US and May 3 in Europe. And given the $1,980/€2,000 price, we don’t expect many Fold buyers to complain they can’t use wired headphones.

Verizon will be first to bring Galaxy S10 5G to the US, T-Mobile and AT&T to carry the Galaxy Fold

What it has is a Dead on Arrival sticker on it. Huawei made sure of that.

Whathewer they reason was to not put jack was a good reason and i agree with it. Hope they will continue with this reason on any upcomming device they make.

Thats real. Its first device next S lines will have no jack too. Or why do you think they added a wireless earpbuds in an S10 box???