Apple was criticized for releasing the most expensive iPhone ever, namely the iPhone X, but that didn't stop the latter taking the number one spot for the best-selling smartphone for Q1 2018. And if you are surprised, just take a look at the ranking below - the iPhone 8 and iPhone 8 Plus follow its more expensive sibling closely in the chart. 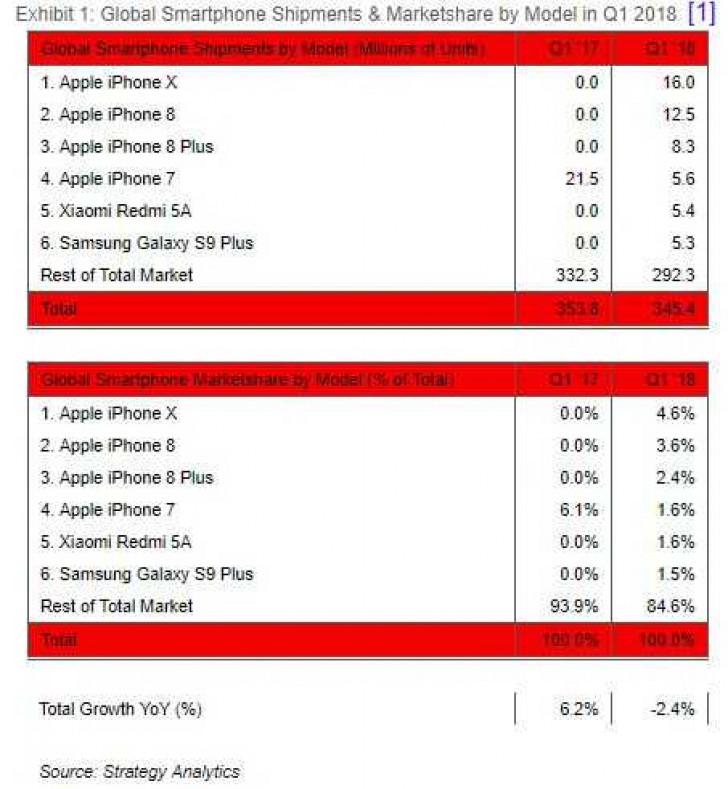 According to Strategy Analytics, Apple has shipped whopping 16 million units during that period while the less expensive iPhone 8 and 8 Plus take the second and third place with an impressive score of 12.5 and 8.3 million, respectively. What's even more impressive is the fact that Apple's previous generation device, the iPhone 7, takes the fourth place in this research with 5.6 million units.

The two remaining spots are occupied by the Xiaomi Redmi 5A and Samsung's Galaxy S9+. However, both results don't seem to be all that surprising since the Xiaomi Redmi 5A was an entry-level device in India priced to sell by the boatload while the Galaxy S9+ was released towards the end of Q1 2018, hence the relatively small number of shipped units.

However, if the trend continues, Strategy Analytics think the Galaxy S9+ will take the crown the following quarter as iPhone X's sales are expected to lose some steam.

Apple Pay gains support for new banks in US, Australia, Japan and Taiwan

Analyst: Apple to stop bundling a Lightning to 3.5 mm adapter with iPhones

Well, duh. Just look at how big the profit margins they place on their phones considering that the iPhone X costs less than $400 to manufacture. If they what Xiaomi did with only around 5% net profit margins and such, they would earn way, way less.

So many headless people, buying phone for 1000 which does not even does anything magical for that price, just crazy how marketing and brand recognition can brainwash people