Remember the Oppo R5? Its premium metal body, stunning aesthetics and thin profile really made it stand out among the crowd, making it a signature Oppo offer. It's now back with an improved specs sheet inside the same razor-sharp 4.85 mm body.

The second version is dubbed the R5s and is already listed on the manufacturer European website. Improvements were made in two departments – RAM is now bumped up from 2GB to 3GB and internal storage is now double at 32GB. The rest of the phone is practically unchanged, making it just as visually appealing as its predecessor. 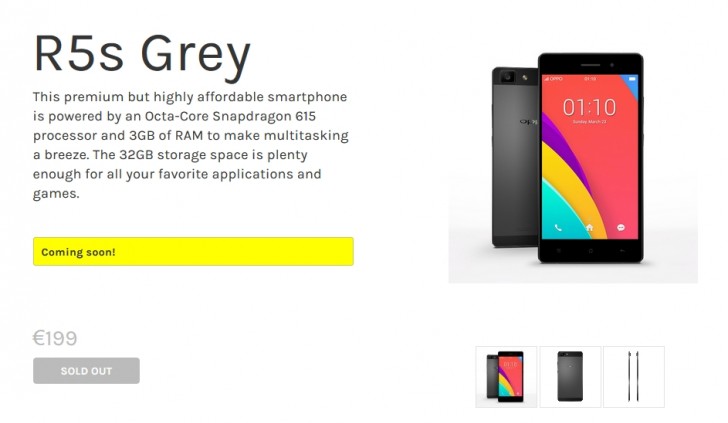 It packs the same 5.2-inch AMOLED display with a resolution of 1080 x 1920 pixels and 423 ppi. It still runs on the mid-range Snapdragon 615 SoC, but in our review of the Oppo R5, we found it to be quite snappy. The camera setup is also unchanged with a 13MP Sony IMX214 sensor on the back and a 5MP shooter on the front, both with an aperture of f/2.0.

The R5s is also powered by a 2000 mAh battery, which is actually bad news, considering the low endurance rating of its sibling. So, that thin profile definitely comes at a price. Other than that the unit should boot Android 4.4.4 KitKat with the ColorOS 2.0 UI.

Currently, the device is listed as "coming soon" and we can't really say when it will be available. However, according to the listing it should go for €199, which is actually a lot cheaper than the Oppo R5 and could significantly improve the phone's chances of success if it turns out to be true.

except you can..0ppos sister company Vivo proved that with a even thinner phone...

why 2000mAh battery?, it because of its design dude. u will get 3000mAh but u have to sacrifice the thickness. Its not special again for R5, and cant be called oppo R5 anymore.