Samsung Galaxy Z Flip3 will get a Thom Browne limited edition, here's what it might look like

Last year the Galaxy Z Flip Thom Browne edition sold out quickly, the Z Fold2 Thom Browne edition proved popular too. These were available in only very limited numbers, however, they are highly sought after – e.g. Samsung produced only 5,000 units for South Korea, but received 230,000 registrations from people wanting to buy a Z Fold2 customized by the designer. So, these are prestige items designed to create buzz around the product rather than offer a significant boost to the sales numbers.

But buzz is good, so Samsung will be making a new limited edition this year – the Samsung Galaxy Z Flip3 Thom Browne edition, according to LetsGoDigital. Samsung makes only one per generation (i.e. Z Flip, but no Z Fold and Z Fold2, but no Z Flip 5G), which means that a Z Fold3 Thom Browne edition is unlikely.

Anyway, this is what the Z Flip3 limited edition should look like. Thom Browne designs are quite consistent with a matte gray paint job and the trademark three-color stripe, so this should be a fairly accurate representation. Giuseppe Spinelli, aka Snoreyn, took the Z Flip3 3D models as a base and made a mock up of the upcoming design.

This year the external display will be larger – a 1.1” two-line display – and all indications are that it will be covered with black glass, which creates a two-tone design. This will likely be preserved for the Thom Browne edition. By the way, there were some expectations that the external display will have Always On functionality, but that is not the case, according to the latest rumor.

Some additional specs from the rumor mill include a Snapdragon 870 chipset (with the more powerful 888 going to the Z Fold3), 8 GB of RAM and 256 GB storage, One UI 3.1 with DeX support, 3,273 mAh battery and 15W wired plus 9W wireless charging. As for the cameras, it looks like the 12+12 MP setup with a wide and an ultra wide lens will be preserved on the back, as will the 10 MP selfie cam.

The phone won’t be alone – Thom Browne editions are bundled with a customized smartwatch and earbuds. This year this means a Galaxy Watch4 (or Watch4 Classic) and Galaxy Buds2. The watch normally has a custom wrist band while the buds usually get a custom paint job for their charging case.

You can expect a few more perks like customized chargers, cables, cases and so on. 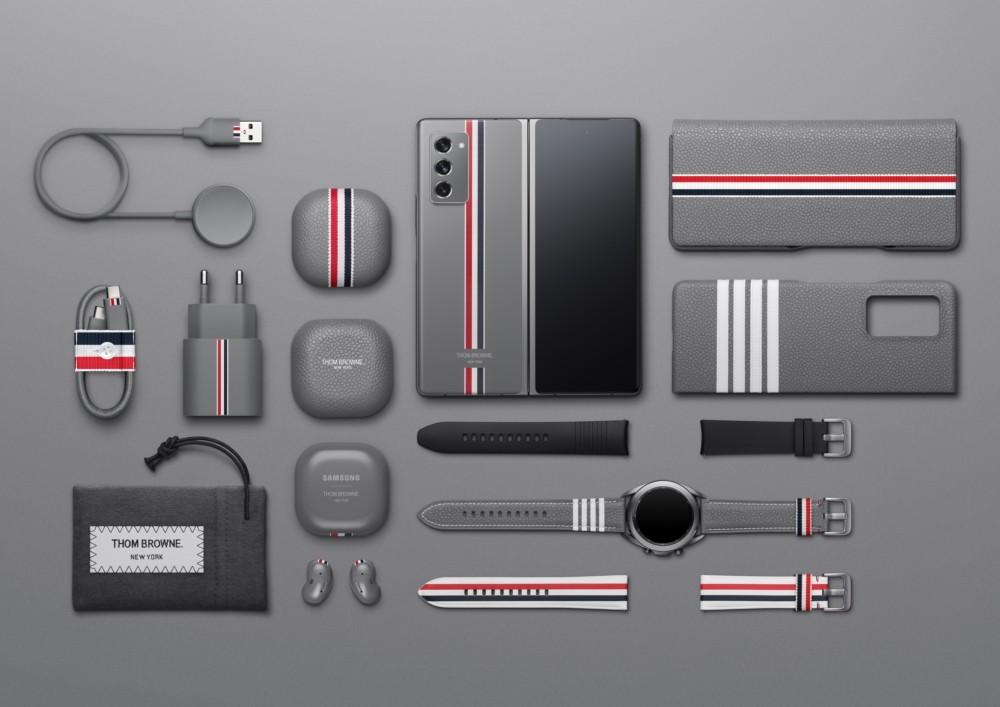 If you think these look cool, we should warn you that this package is usually rather pricey. The Z Flip Thom Browne edition sold for $2,480, which was more than the cost of the plain phone + watch + buds.

The Z Flip3 can be up to 20% cheaper than the current model (in part due to opting out of the top shelf chipset), while the Watch4 Classic will cost the same. The Buds2 might end up pricier than the Buds+ they are meant to replace. The limited edition bundle isn’t going to be cheap and even if you have the money, chances are that there will be more buyers than units.

Absolute proof that money doesn't buy class. That is hideous

Spending on this type of products is just a show-off. Even, my annual rent of home isn't 1000$.

Tbh, that's how business works. Extract maximum amount of profits through minimum amount of efforts. Samsung will continue to make profits in future (only if they can sustain) for their brand value. Companies like Sharp or Sony could never ...