T-Mobile G1 available in UK, yours for free on a 40 GBP monthly plan

T-Mobile stores in UK are ready to rock'n'roll, offering the hyped Android-based T-Mobile G1 phone. The most anxious to get it have thrown a long line in front the T-Mobile shop on Oxford Street as early as 5 AM.

T-Mobile offers the G1 for free when you enter into a year-and-a-half contract for a 40GBP monthly plan.

In case you have been away from the planet Earth recently, the controversial T-Mobile G1 is the first handset powered by the Google's own Android mobile OS. It's manufactured by HTC and it only now arrives on our side of the big pond.

The T-Mobile G1 offers tight integration with all Google services but has a rather unwieldy looks and its third-party application base is yet to be developed.

While the hype over the G1 in UK gains speed, the overseas retailers of G1 in the USA are ready to lower its price in an attempt to boost the sales volumes of the device. 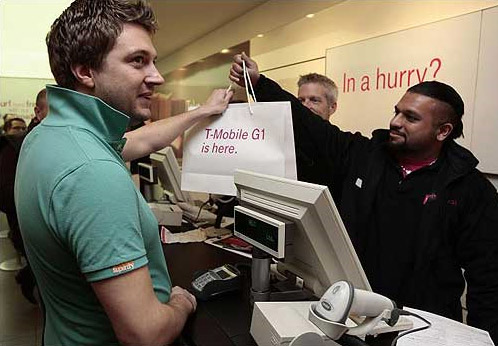 My friend has got a G1 few days ago, he told me that the battery is extremely bad, he had a switch of charged about 12 hrs when he first got it, but the battery still cant last 24hrs, and it switched itself off. then he went to the tmobile shop, the ...

If you don't like the G1's looks, then just consider its functionality. I think it's pretty slick if you ask me. If the g1 isn't that appealing to people, then we just have to wait for Motorola to come up with its own Android phones by next year...

I think this phone has a great OS but the look does not stand out, T-mobile wanted a step up from the sidekick and the developers at Danger was not improving the OS fast enough for T-mobile "all this is hear say". The only perks that the G1 has in my...