T-Mobile will sell the 2016 version of the Galaxy Tab S2 9.7, Bluetooth certification reveals

This year Samsung has quietly refreshed its flagship tablets, boosting their specs somewhat but keeping the design and the names of the Galaxy Tab S2 8.0 and 9.7 the same. T-Mobile is already selling the 2015 iteration of the Galaxy Tab S2 9.7, and it looks like the magenta carrier now wants to offer the revamped model too.

We draw that conclusion from a recent Bluetooth certification received by a Samsung device with the model number SM-T818T. The first "T" stands for "tablet" in Samsung's way of naming things, while the second one means the device is a version built for T-Mobile USA. And since the 4G-capable internationally unlocked model of the 2016 Tab S2 9.7 is the SM-T819, we assume that this will be T-Mobile's variation of the same product. 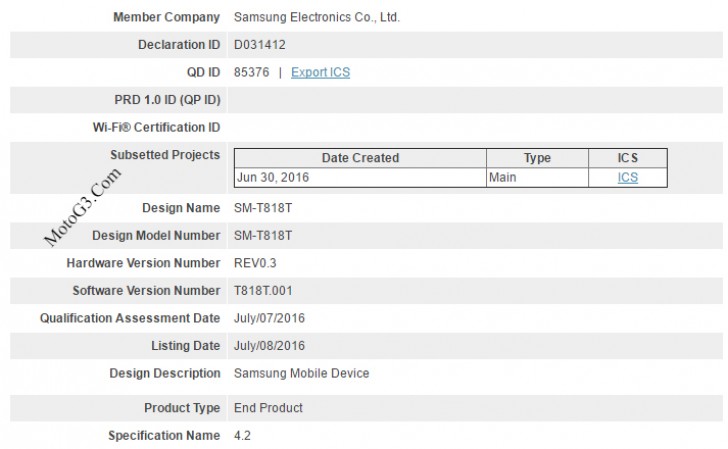 Thus, you should expect it to become official in the near future, coming with a 9.7-inch 2,048x1,536 touchscreen, and the Qualcomm Snapdragon 652 SoC powering it (with Adreno 510 GPU and an octa-core CPU having four Cortex-A72 cores clocked at 1.8 GHz and four Cortex-A53 cores at 1.4 GHz). 3GB of RAM ought to be in along with 32 or 64GB of storage (expandable via microSD).

It will also have an 8 MP rear camera, a 2 MP front-facing unit, a fingerprint scanner, 4G LTE, and a 5,870 mAh battery. It will run Android 6.0 Marshmallow.

every year, tablet were shipped more than 200 million worldwide, meaning there is a huge demand over it and it doesn't seem to be dead anytime soon that's for sure.

No rumors of the Tab S3 yet? I don't want to get myself a Tab S2 8.0 now and the new generation might be released soon.