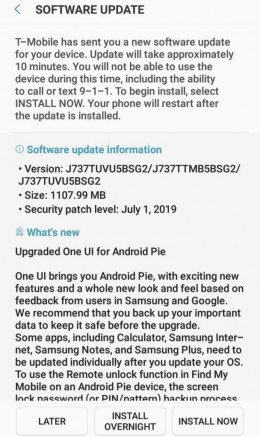 Another day, another Samsung smartphone gets the update to Android 9 Pie. This time around it's T-Mobile's Galaxy J7 Star on the receiving end of Google's latest OS (for a few more days), which comes alongside the Korean company's innovative new user experience dubbed One UI.

If the name doesn't sound familiar, know that Galaxy J7 Star is the name under which T-Mobile chose to sell a phone that is otherwise better known as the Galaxy J7 (2018) in most parts of the world.

The update arrives over-the-air as a 1.1GB download, which means you may be safest trying to grab it over Wi-Fi. Once it's installed, you'll be running software version J737TUVU5BSG2, with the July 2019 security patch level. We're almost at the point where the September level would be current, but for such a low-end device we probably shouldn't expect more.

As usual the rollout could be going out in stages, so don't worry if you have a J7 Star bought from T-Mobile and haven't seen the update notification yet. It should arrive within the next few days. If you're impatient you can always try manually checking for it by going to Settings > Software update > Download updates manually.