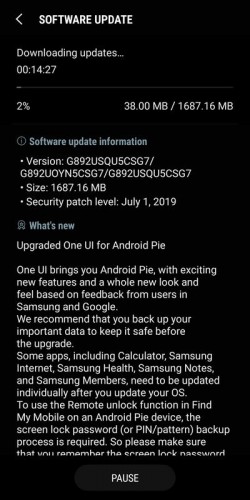 T-Mobile and Samsung have finally started sending out the update to Android 9 Pie for the magenta carrier's version of the Galaxy S8 Active. Late? Definitely. Not just considering that Google has already released Android 10 for its Pixel smartphones, but T-Mobile's own non-Active Galaxy S8 got to taste Pie nearly six months ago.

Anyway, it is what it is. Unfortunately the Active models have always lagged behind in software updates, so it's probably best to focus on the fact that Pie is finally here for T-Mobile's S8 Active.

The update arrives over-the-air as a 1.6GB download. Upon installation you'll be running software version G892USQU5CSG7. It packs the new One UI by Samsung on top of Google's Pie, and also includes the July 1, 2019 security patch level - just to go with the whole lateness theme even more.

While some owners of TMo's S8 Active have already received this update, it's probably undergoing a staged rollout as usual. So it may take a few days for your particular device to notify you about it. In the meantime, if you're impatient you can keep trying to Download updates manually in Settings > Software update.

Samsung Galaxy M10s will have an AMOLED screen, ultrawide cam and fast charging

When AT&T and T-Mobile shut down their 3G networks, the only one that won't lose total service is the AT&T variant.

still JULY update !! today s10 got an OS update and just to add animation boot screen and t-Mobile apps it will take 5-6 months

its more likely T-Mobile "testing" the update for that long and fixing bugs. less likely Samsung causing the delay