Twitter rolled out Night Mode for Android and iOS in 2016. Today, the company has rolled out an OLED-friendly dark mode for the latter.

Twitter has announced a new feature called "Lights out" which brings a proper dark mode to its iOS app. Turning it on changes the app's UI to pitch black instead of dark blue. This does a better job at conserving battery on your device if it's equipped with an OLED display. 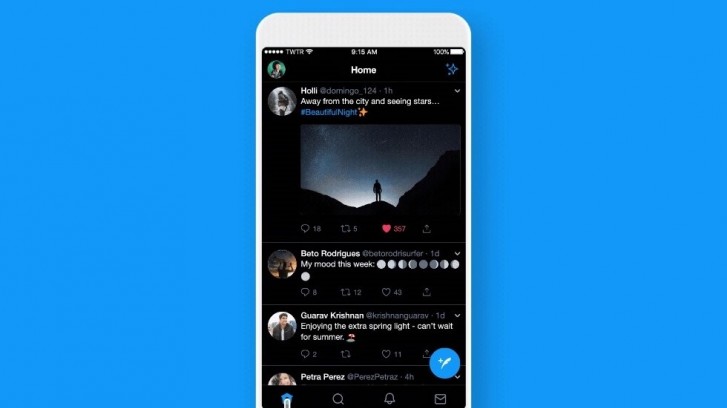 To turn on this new dark mode, head over to the Settings and privacy > Display and sound menu and tap on the toggle button next to 'Dark mode'. Doing so will give you two options - 'Dim' and 'Lights out'. Select the latter to get a black background. The old Night Mode is now called "Dim".

There's no word on when this feature will make it to Android.

Twitter's Night Mode is now officially available for all on Android

The latest Twitter prank is locking users out of their accounts

Yes# These were sooo amazing on my Lumia 720

The twitter on my ipad has been black for more than 1 month.

When I think that all of those app on Windows mobile (twitter, WhatsApp, Outlook, YouTube) had those dark theme 6 years agoÂ… and now the same dev takes ages to push the same thing on other plateform… Say what you want, only necessity pushed me...