For the first time since the service debuted back in 2006, Twitter is increasing the character count of its posts (called tweets) from the original 140 characters to 280 characters. The change is being rolled out to a small group of users right now and will be available to everyone soon. 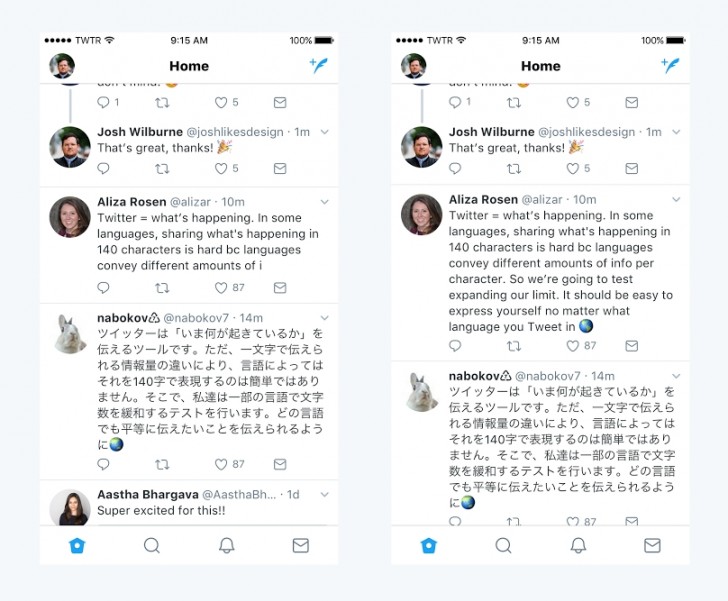 In its blog post, Twitter explained how most users were frequently running into the 140 character limit. This was especially common to English speaking users, who would eventually have to split their thoughts into two or more tweets chained together as replies.

In comparison, however, Asian users in China, Japan and Korea did not face the same problem, as the nature of their characters allowed them to express more in fewer characters. This resulted in very few of the East Asian users using up all of the 140 characters.

Because of this, Twitter has decided not to roll out the 280 character limit to Chinese, Japanese and Korean users. Everyone else should be getting it soon.

The 140 character limit is a remnant of the past back when the site had a feature to send tweets over SMS. In order to fit a tweet into the 160 character limit of a single SMS, along with some extra characters, the length of a tweet was limited to 140.

However, the SMS service has long been put to rest so apart from the differentiating factor of the 140 character limit there was no logical reason for Twitter to stick to 140 characters anymore. However, since the service is still about brevity they didn't just lift character limit altogether and decided to go with 280, which is large enough for most people to now fit their thoughts within just one tweet.

It remains to be seen how users take advantage of this new limit. Of course, everyone will do it differently, some in ways that may not be very nice. Twitter famously has an online harassment problem, which the company continues to ignore and it may have just given an even bigger weapon in the hands of the miscreants. Still, for the vast majority of the users who aren't terrible, this will only be a good thing.

Hopefully Trump uses this to his full advantage lol

It'll go up again by presidential decree come next election