A new report from WinFuture leaks an image with two new alleged variants of the Huawei Watch GT. Huawei first announced the Watch GT alongside the Huawei Mate 20 Pro with its own proprietary operating system called Light OS.

According to the report, the two new models are called: Huawei Watch GT Active and Huawei Watch GT Elegant. The image below is the alleged “Elegant” variant in “Dark Green” and “Orange”. 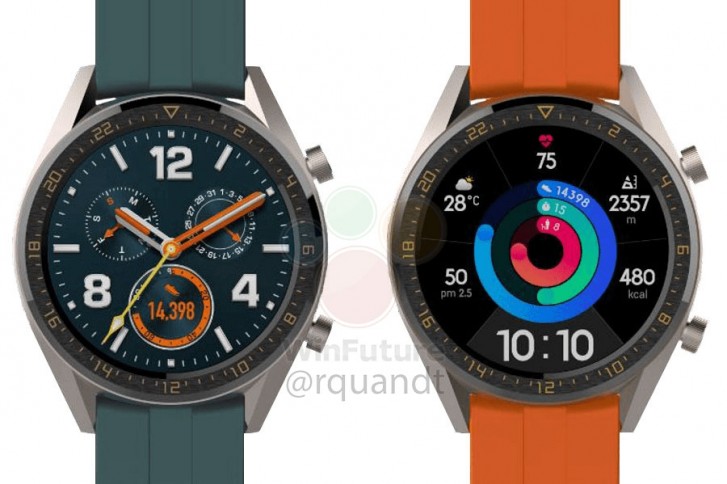 The watch body has a slightly different appearance – the first thing you might notice is the style of the physical buttons. The other difference is a watchbody finish somewhere between gunmetal and gray. There are otherwise no other seemingly drastic changes with the Watch GT aisde from the watchbands.

According to the report, the new variants will have the same 1.39-inch OLED display and the Watch GT Active could come in White and Black.

While the Huawei Watch GT is currently retailing for €199 for the Sport version and €229 for the Classic version, an “Active” version might cost €249 while the “Elegant” could go for €229.

Based on these pricing figures alone, we’re a bit skeptical as to why Huawei needs two more variants of the Watch GT. I guess we’ll find out when the P30 event rolls around on March 26 in Paris.

No GPS, not compatible with android smartwatch apps. Waste of money.

Oh dear..why does those activitiy rings look extremely familiar? I wonder where they got the inspiration from?? Ahaha what a joke..