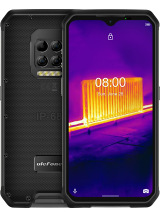 What's the sd card capacity on the armor 9?

may i ask , Malaysia can use ?

Which something I don't like it, it's camera isn't as they said 64 mega pixel. Most of the photos are flare and not clear as Huawei mate 20 pro.

What is the temperature ranges of thermal camera reading in Celsius.

I have it for mont now and i have only good things to say about it , it's -20 to -30 rn in Finland and battery stays charged like normally while i have friends with iPhones that shut off after half an hour.
because of pandemic i surf , browse , chat and play games alot and usually get 42-28hrs of battery life with 15hrs screen on time like this

Alfanicatonerate, 13 Nov 2020It HAS EARPHONE jack. I have been using it over a month now... moreI don't have any issues with it and i use all of it's functions

It has four cameras but I can only seem to get 3 working. The low resolution camera doesn't seem to do anything.

Dometalican, 13 Jul 2020To GSMArena, According to Device specifications website ... moreIt HAS EARPHONE jack. I have been using it over a month now and it has Camera focus issue. Anyone has the same problem?? It is Built like tank. Battery lasts 4 days with full usage which is insane..

Dometalican, 13 Jul 2020To GSMArena, According to Device specifications website ... moreI am looking at mine right here and it def does have a headphone jack - it uses it for FM andenna as well

kOVO, 28 Aug 2020the phone firmware is shipped with OTA ADUBS which is banne... moreIt has gorilla glass.

I bought this device. It does not have a barometer sensor, but otherwise this page seems accurate.

GSMARENA should also list other rugged phones, inclusive off but not limited to OUKITEL, BLACKVIEW, CUBOT, DOOGEE on their websites. Thank you.

Dometalican, 13 Jul 2020OMG, thanks for the image! Great to see that they have it! ... moreAlso, click on "specs" on the ulefone website and scroll down to "ports". Once there, you will see: "3.5 mm Headphone Jack".

Dometalican, 13 Jul 2020To GSMArena, According to Device specifications website ... moreDude, which Ulefone website said it does not have a 3,5 mm port? Can you read?

Honestly looking at this phone it makes me wonder, what an active variant of the galaxy s20 ultra would have looked like if it existed...

Dometalican, 13 Jul 2020To GSMArena, According to Device specifications website ... moreI have the armor 9. it has a headphone jack.