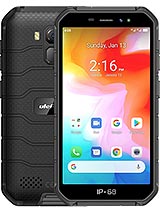 I got the first one as I needed 4g and Orange had scant coverage her so needed a phone to accept my UK SIM (Vodaphone, thank you vodaphone) and a french one. That one worked well and so I got another. This one had a problem internally even the manufacturers were a bit shocked about the problem, so I got another one and sent the wrong one back. Android 10 is real easy to use and so is the phone. Only niggle get the operator store to put the chip in. I am a radio tech and found that it was a bit of a problem, possibly I need more usage of doing it. Transferring photos is not so easy though, that is the software and google not the phone though. Well done Ulephone, good service, listen to clients, and machine is user friendly.

I bought the X5 for myself a year ago and love it..does everything I need..just bought the X7 for my wife, plus a 128gb card.The phone was only $120 CDN delivered from Aliexpress..great deal ! She loves it !

This is my review of the Ulefone Armor X7 that I have submitted on the Ulefone site.
I have had the Ulefone Amor X7 for a few days now. It was easy to setup and accepted my network provider (Rogers in Canada) and my WIFI setup. Surprisingly, download speeds were faster than my previous phone which was much more expensive.
I had been concerned about the limited ram 2gb and storage 16gb. I put in a fast 128gb San Disk Extreme micro SD card which has been a great help. I formatted the card for internal storage and turned on storage manager. So far the OS has done a great job managing storage and when the 16gb storage gets close to 2/3 full, it begins moving apps and other items to the micro sd card. When the phone is running, there is always about 500 to 600 megabytes of ram free as the OS swaps different programs in and out of memory.
There are ways to make the lower memory issue work better.
1. Try to stick to the stock Google applications for most functions. They behave well and are efficient.
2. For other applications, focus on providers who know how to code like Microsoft, Blackberry, etc.
3. Only use the Google Play Store.
4. Stay away from video or memory intensive games
Well written applications do their job and move in and out of memory easily.
I had some surprises. In Android 8.1, my VPN kept on disconnecting every time the screen was locked. In Android 10, my VPN stays connected all the time and always reconnects with a change in network.
The camera is a pleasant surprise. It takes accurate clear pictures. I switched from the included camera up to FV-5 which give me more control over the individual settings. This has produced better results for me.
The overall construction of the phone is strong. Not surprisingly, it is heavily based on plastic and the potential exposed areas like the USB connection, SIM and micro SD card are protected by rubber covers that seal well. The screen protector was preinstalled and there is a spare included in the box along with the micro USB charger, USB cable and pin to open the SIM / micro SD slot. The phone should stand up to any regular rough handling that is likely to come from normal wear.
The 1280 x 720 screen is appropriate for this size of phone and the PPI is 294 which is quite sufficient for clear and easy reading. I have not experienced any lag with videos or viewing pictures.
The budget CPU does it's job but you do see some slowness when searching within Settings. It is important to use Dura Speed wisely and only allow your key apps to run in the background. That will improve your overall experience.
I was pleased to see my first OS update on my first day of use. The phone is now updated to Android 10 security for April 2020. Android 10 separates some updates from major OS updates so I am hopeful that the updates will keep coming. The process of doing some updates via the Play Store should make software updates more frequent with less pressure on the manufacturers.
Ulefone ships with a stock version of Android and only includes one or two utility apps with the phone. There is no bloatware or adware on the phone. This helps with memory efficiency and storage.
The fingerprint reader works well. I would prefer a placement on the side of the phone vs the back but I will adapt to the placement. I have not tried face unlocking because I am not interested in that feature.
My main focus is on emailing, calendar use, and managing some social media sites. That is why this phone works for me. I am not worried about games or intensive video experiences. For me, the Ulefone Armor X7 is a worthwhile choice because it does what I want it to do and represents strong value for money.
So far battery life is good but I have not had the phone long enough to really have an accurate way to rate this. Because of the smaller screen and 1280 x 720 resolution, the 4000 mAh battery should be able to last through a full day of use. Charging speed is reasonable for a micro USB connection. I was surprise that Ulefone did not go for USB C but that choice was likely determined by the markets that they intend to sell in and the budget constraints of the phone.
I do recommend this phone but I would suggest that for the additional $20, people should consider the Ulefone Armor X7 Pro as it doubles the available memory and storage.

Inmate897, 28 May 2020When are they comings to Canada and were to buy one and how... moreIt will never be sold directly in Canada. You either have to buy from Ulefone directly or AliExpress. Expect long delays in the current health situation. My order took 8 weeks to get out of Singapore when it was sent there from China and is now on it's way to Canada.

D-angelo, 24 Mar 2020why is this phone built or deigned like this?It is hitting a target market of an extremely inexpensive rugged phone. No one cares if they can play games on it. If you work in a environment where phone damage is an issue, this is a nice alternative with broad network support and some decent specifications. It is a work phone.

The Ulefone Armor X7 is a unique combination of features in an inexpensive rugged phone. For those who want a rugged phone on a budget and are prepared to accept some compromises, it is a good choice. Android 10 means that you will be able to get some OS updates via the Play store which is a big plus. The main limitations are the 2GB of Ram and 16GB of storage making a microSD mandatory. The limited memory means that you must select your apps carefully, look for Google Go apps and not install too many apps on the phone. Stick to the standard Google apps without substitution and you will still have a reasonable experience. For slightly more money, you can purchase the Ulefone Armor X7 Pro which has 4GB of RAM and 32GB of storage which is a more reasonable figure. Expect long shipping times while Covid-19 is a factor.

Inmate897, 28 May 2020When are they comings to Canada and were to buy one and how... moreyou can buy online from ulefone with shipment to Canada - with shipping and exchange, it works to ~CND 170.

it's shock and water proof and is perfect for people who are trades men or enjoy out doors like me. If you want a rugged phone for work or a second phone that can handle outdoor life.. This is it and it's a bargain.

I am delighted with my new Mobile phones it has excellent features on it for an inexpensive device. I am not on social media and have no intention of joining any of the platforms. This device has everything i need and more. Awesome value for money. As displayed in picture and description.

Great phone! It has everything I need. I will definitely buy it!

Now better than ever to be able to use the phone with gloves mode due to the COVID-19. nice

This one looks like the S42 from CAT, but the price is much cheaper. I am using their Armor 2 until now, very happy with it, no damage after several drops, the battery is amazing.

Ulefone phones are great. I have an Armor X5 and its perfect. This Armor X7 comes with the latest Android 10 system and is definitely an advanced rugged phone. I want to buy one.

why is this phone built or deigned like this?