Xiaomi's large success last year was in large part due to the manufacturer's latest device lineup with successful handsets like the Xiaomi Redmi 1S, Redmi Note and the Redmi 2. The latter is an extremely affordable device, priced at around $100. Xiaomi has realized its appeal and news has just surfaced that an upgraded version is already in the works. The original model is powered by a 64-bit quad-core Snapdragon 410 SoC, has 8GB onboard memory, a 4.7-inch HD display, 1GB of RAM and even offers LTE connectivity.

The new improved version has popped-up on TENAA - the Chinese certification authority and it seems to be very similar to its predecessor, but with two very important changes. First of all the RAM has been bumped-up to 2GB, which is a lot more adequate on today's mobile scene. Storage is also doubled at 16GB, which is also a necessity given the growing requirements of a lot of Android apps. 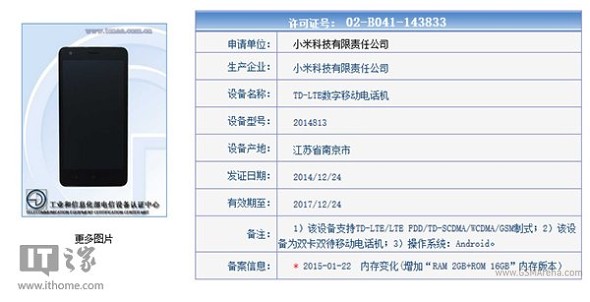 Other than that the new Xiaomi Redmi 2 looks pretty much unchanged. It is equipped with the same set of cameras - an 8MP main shooter with LED flash and a 2PM front one. The device will probably ship with the same Android 4.4.4 KitKat OS as well, coupled with MIUI V6 on top.

If Xiaomi manages to keep the original tantalizing price tag the improved hardware might just rekindle the handset's popularity and prove to be a really smart move in terms of competing with rivals, like the Meizu M1 Mini, for example. With certification already passed the new Redmi 2 should hit consumer markets really soon and take its place among the premium Xiaomi Mi Note and Mi Note Pro models to complete the company's current lineup.

I can't wait for this phone..