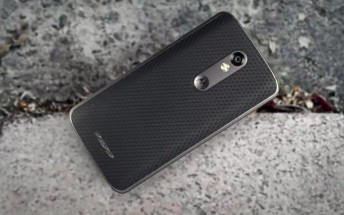 Verizon and Motorola are set to announce the Droid Turbo 2 and Droid Maxx 2 at a special event on October 27, which is exactly one week from today. Yet for whatever reason the carrier simply got impatient, and through a teaser video revealed what the back of the Droid Turbo 2 looks like.

Big Red posted the video on its official Twitter account, accompanied by the words "Introducing the perfect phone for imperfect people". This probably has something to do with the Droid Turbo 2's rumored "shatterproof" display, which it will share with the Moto X Force (its alleged international version).

This means Verizon may be positioning the new Droid Turbo as a slightly rugged device, able to withstand certain human 'imperfections' - such as dropping it, for example. We've recently heard that the Droid Turbo 2 will be added to Motorola's Moto Maker online customization service, which will be a first for the Droid line. And spec-wise, the Droid Turbo 2 should be a true flagship-class offering.

you can predict future

Just wait to see the front, you'll be surprised: it has a rectangle form, with glass and touchscreen.