In a bit of rather surprising news, Verizon has announced it will soon be rolling out the update to Android 5.1.1 Lollipop for the LG G Vista.

If that name doesn't sound very familiar, that's understandable. After all, this is a mid-range phablet launched last year with Android 4.4 KitKat, and we assume not many people would have bet on it ever getting a big software update. Not only is it on track to receive just that, but the G Vista is amazingly skipping Android 5.0 entirely and jumping from KitKat straight to the latest publicly available version of Google's mobile OS. 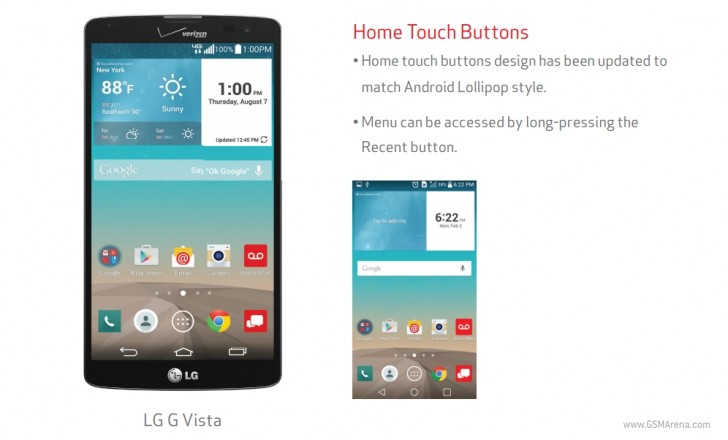 The official update documentation is now up on Verizon's website (see the Source link below), and the rollout should follow shortly. The new software version is VS88023A, and it brings with it plenty of changes.

The software-rendered Android buttons have a new design, lock screen notifications show up, and Smart Lock uses trusted devices to auto-unlock your phone. The controversial Interruptions feature of Android Lollipop makes an appearance too, and you should expect to see Material Design everywhere. Screen Pinning lets you lock the display to a single app, Settings are now searchable, bad Wi-Fi connections can be avoided through a dedicated setting, and some unnamed security patches are in as well.

When can I update?

Has Google dropped Motorola for LG? A good decision in my opinion. I do like my g vista.