The vivo S6 5G will be fully revealed on March 31 and while the company has already posted some teasers, one thing has remained hidden (even after TENAA published a detailed spec sheet). Where does the 5G capability come from?

The answer is the Samsung Exynos 980 chipset, which features an integrated 5G modem. Yes, vivo is using Exynos chips in some of its phones - in case you missed them, the vivo X30 and X30 Pro use the same chipset.

Anyway, this revelation comes by way of a Geekbench v5.1 result, which is quite interesting as it offers an early comparison with the other choice of mid-range 5G chipset - the Snapdragon 765G (which is used by the vivo Z6 5G by the way). 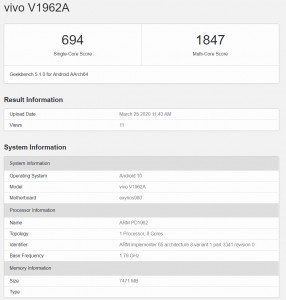 The Exynos 980 posted a higher single-core score, the Qualcomm chip gets in the 400-450 range. Both get a similar multi-core rating. The interesting bit here is that the Snapdragon is a 7nm EUV chip with a "prime" core (i.e. one of the big core runs at a higher clock speed than the others).

The Exynos is an 8nm chip and both its big cores run at the same speed. Of course, the Samsung chip is based on the newer Cortex-A77 architecture , which promises 20% improvement over the A76 that Qualcomm used as a basis for its Kryo 475 cores.

Of course, Geekbench doesn't tell us anything about power usage, so we'll see how that goes once the vivo phones and S765-based competitors go live. The S6 will have a 4,390 mAh battery, smaller than Z6's 5,000mAh power unit.

Well, top exynos lost its battle to 865, but midrange exynos is kicking ass, good to know :)

The what ? People already purchased and got deliveries, lol.

1. Exynos has weaker GPU than Snapdragon variant. 2. Exynos in S10 series is lose Thermal compare with Snapdragon or even Kirin. 3. Exynos's GPU in mid range phones, just like kirin and mediatek. They choose higher clocks over the cores. So its j...