vivo has just been granted certification for two upcoming phones, which popped up on the Google Play Console - the upcoming vivo V21e 5G and vivo Y73. The V2055 and V2059 smartphones appeared with similar specs and looks, but with one key difference - the former phone will be powered by a Dimensity 700 chipset with 5G connectivity, while the latter will stick to a 4G-only Helio G90. 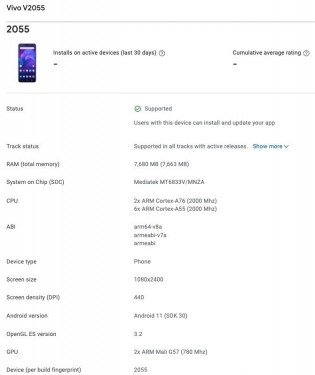 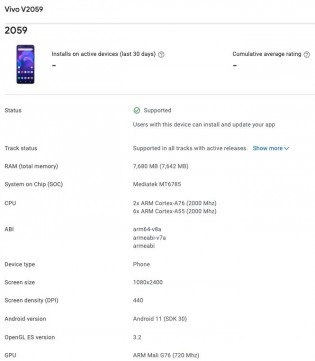 Aside from the different chipsets, everything else is the same - a Full HD+ screen, 8GB RAM and Android 11 out of the box. On top of that, even the pictures are apparently the same - a basic handset with a waterdrop notch for the selfie camera, while the volume buttons are on the right side. Keep in mind that those might be placeholders, though.

The power key is on the side, and by the looks of it, it might have an embedded fingerprint scanner, meaning the front panel is likely an LCD. Of course, it could also be an OLED panel and vivo saving a buck by skipping the UD fingerprint scanner (just like Xiaomi did with the Redmi Note 10). We’ll know for sure once these phones arrive, but so far we haven't heard anything about a launch date.

V21e 5G might be similar to the Y73s 5G, with some minor changes. It'll be a great option if it manages to undercut the Galaxy A32 5G and priced like the A32 4G.