Today vivo announced the V7+ - a budget smartphone with an 18:9 "Fullview" display, 24MP front-facing camera and a triple slot for two SIMs and a microSD card.

The storage is 64GB but it can be expanded through the microSD card slot. The vivo V7+ is equipped with a 3,225mAh battery.

The cameras on the vivo V7+ are the phone's key attractions. We're looking at a 16MP main snapper with ultra HD mode, which captures 4 pictures and combines them into a 64MP image. The selfie is a 24MP unit with a selfie flash dubbed Moonlight Glow, Face Beauty 7.0 and Portrait Mode that simulates background blur. 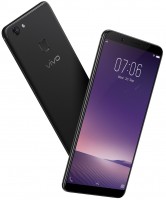 vivo V7+ to debut on September 7

Vivo is fooling the public. Actually the Snapdragon 450 Processors can support Camera sensor upto 21MP but they are saying its having 24MP. How will it possible. For More Clarification Please check the link: https://www.qualcomm.com/products/...

Agree but the processor is not outdated at all, infact Vivo is the first one to use SD450. It is weak and will lag and display is just HD (wide aspect) for 21+K INR. It's too much. Sony too has 23, 24 MP cams but their quality is nothing compar...