The launch date of the vivo X23 is set for early September, about a week from now. However, we've been getting plenty of teasers and now there's this – a page for the X23 up on the company's website, even though it’s not meant to be publicly accessible.

It shows the phone in three colors: Phantom Purple, Magic Night (blue) and Phantom Red. Unfortunately, the specs are price are yet to be filled in, at least beyond what the teasers showed.

The phone is going to pack 8GB of RAM and 128GB storage, that much is clear. There’s no 6/64GB version, at least not one that we could find. 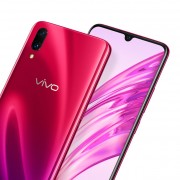 So we fall back on rumors – Snapdragon 670, teardrop notch, FullView display with an in-display FP reader and a September 6 launch.

Well the pink red one looks adorable should be a good present for girls.