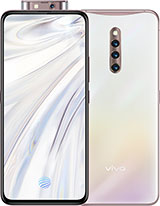 richard, 29 Jun 2019hi, Is V1836A the international version? and V1836T the Ch... moreplease be kindly informed that there is no international/global version of this phone, its only release in china and can buy only in china at discounted price 3200 yuan or 457.7 usd. but dont be upset you can change the language in english and can install google. since the phone is chinese version which is mainly design for chinese user so the language in some build-inn apps cannot be change.

richard, 29 Jun 2019hi, Is V1836A the international version? and V1836T the Ch... moreAny international or local sim card can be use in V1836A. but you cannot make vivo account the model only support china and india sim card.

is very expensive for value !!!

I wondered how come vivo pack the phone with all these features then put snapdragon 710 .. and the price tag is around oneplus 7 and redmi k20 pro which have 855

I also hope find this one in France, i had looking for this kind of phone since a long time, Have the X27 pro the Blaster IR?

Anonymous, 25 Apr 2019I hope BLU brings this phone to the USA!!!!!!!Vivo is an actual mobile manufacturing company who are creative and innovative, while BLU is a cheap American knock-off brand that just imports mobiles and puts their own name on them.

Anonymous, 25 Apr 2019I hope BLU brings this phone to the USA!!!!!!!BLU and Vivo are two completely different companies.

Its Moto X style back panel !

This phone would've been great but it failed by putting such a tall screen aspect ratio. There was no reason to do this, my Huawei Mate 20 X with a 7.2" screen and a 18.7:9 aspect ratio is still tolerable in the hands. It's just terrible for media consumption since I feel like the black bars on my phone are too big, imagine this phone!

This reminds me of Motorola made Nexus 6

Awful to look at with POP UP chip on mode!!! Rather why not a LED Flash with V15 Pro with that tiny Pop Up Chip??? It'd be better I think....

I do not understand the manufacturers and developers of such hardware, they increase the amount of internal memory, but they leave a defective slow connector, removing the removable drive, how long does it take to record or copy small files such as photos or music for such a volume using usb protocol 2.0?

Anonymous, 12 Apr 2019exactly what i was thinking. they blatantly copied moto g 2... morethat's not blatant at all, just partly