vivo launched the X23 last September, and the company is now about to unveil its successor, which will be called the vivo X27.

The Chinese phone maker has announced that it will launch the phone in China on March 19. It come with a triple-camera setup on the back which will include one 48 MP camera. The other two cameras will be 13 MP and 5 MP sensors according to a TENAA listing.

vivo has also shared a poster which reveals the phone will feature a notch-less display, meaning it will come with a pop-up camera for selfies. A recently leaked live image of the X27 gave us a glimpse of that. 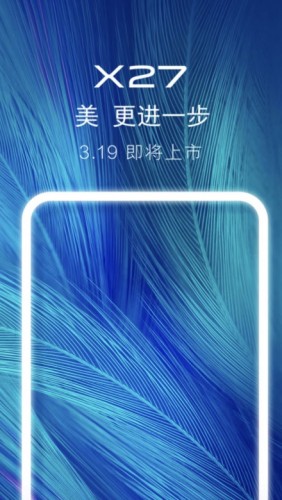 TENAA also revealed the phone is powered by Snapdragon 710 SoC coupled with 8 GB RAM. It sports a 6.39-inch Full-HD+ AMOLED display and will have 256 GB of storage onboard.

The smartphone will come with a 16 MP pop-up selfie camera and a 3,920 mAh battery. It will run Android Pie out-of-the-box and is expected to feature an in-display fingerprint scanner.

Oppo R19 and vivo X25 to arrive with pop-up cameras

I really hope that punch hole will die faster then notch.....

Lol why are they not creating phones with screen-hole instead, no one likes Samsung? I bet if it was crApple that did that first everyone would have followed suit.