The three-strong vivo X80 lineup is expected to arrive soon and two of the phones were spotted on BIS India’s database. The vivo X80 (V2144) and vivo X80 Pro+ (V2145) are now certified in India and their market launch should come soon enough. In the meantime, the X80 was also spotted in a Geekbench listing which confirmed the phone is powered by the Dimensity 9000 chipset. 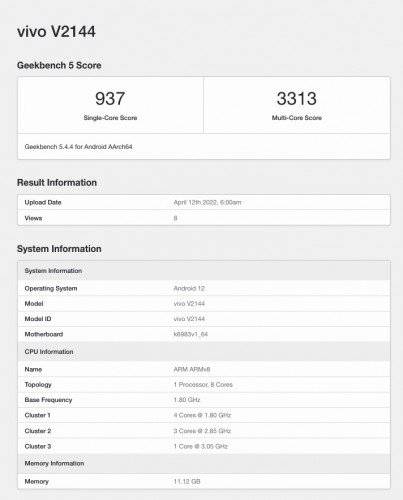 The Geekbench listing also shows 12GB of RAM and Android 12 on the software side. The vivo X80 managed 937 single core points and 3,313 multi-core points on the tests. The new listings come just a day after the X80 appeared on the Google Play Console which revealed the phone’s curved FHD+ display and punch hole cutout as well as re-confirming the Dimensity 9000 chipset. The X80 Pro+ also ran a Geekbench test last week showcasing its Snapdragon 8 Gen 1 chipset.

Love the design off this, looks similar too S22Ultra and note10, boxy, rectangular retro oldskool with sharp edges.

great to hear! i hope vivo users in europe will be excited about this

Confirmed to be launched in europe this summer