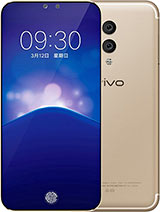 What is the cost of this mobile

Maybe, this will be the new Vivo Apex?

Pakalini, 15 Sep 2018why cancel? :/This phone is literally just a concept.

this phone is good for games...why get one since if it will drain your battery immediately...emergency arise your phone is dead but eventhough you have a powerbank still this is not good as a phone.

AnonD-728268, 03 Jan 2018i would get this but the under glass FP imposable You do know that the under screen fingerprint scanner is already created by this company and has been tested by many tech youtubers and techies on the internet? And it works. Granted, it doesn’t scan the DNA but takes picture of it and isn’t too slow

AnonD-728268, 03 Jan 2018i would get this but the under glass FP imposable what? it is possible they showcased it on CES

i would get this but the under glass FP imposable

AnonD-441601, 04 Nov 2017But apple has. Fingerprint scanner is mounted on middle bot... moreThey were talking about it being underneath the display, not below.

Anonymous, 27 Nov 2017This is an amazing phone. Underscreen fingerprint recogniti... moreIt doesnt matter who will be the first device with under screen FP, impkrtant is that they can made it

Terrible chinese copy brand that lookds identical to iphone.. same back design and front design, only difference is the screen is edge to edge and 6gb ram... Doesnt it show itll be bad! not even samsung done more than 4gb yet,

Rubbish you are talking. Xplay 6 got update to 7.1 Nougat a while ago.
Please check your facts before posting nonsense.

This is an amazing phone. Underscreen fingerprint recognition is not impossible, but is not Samsung or Apple first is Sony to mention, but who will be first out on the market with such tecnology as no release date had yet been announced. Exciting stuff.

If this phone is for real and true will be amazing. So far I not seen a video off a working hands on version on youtube. So I'm unsure if this is for real. Will be the first if true built in screen finger print reader, because not been achieved by Samsung yet.

After getting update OS on my V5 plus. I can be sure I will buy this product if it exists.