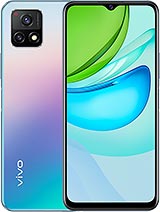 it's just something snapdragon 710 which support 5G...
with the price i would like to buy Redmi note 10 Pro...

joe nodden, 06 May 2021Yeah the whole dozens of Redmi Note 9's and 10's ... moreXiaomi and its subsidiaries are basically having an identity crisis right now as far as their phones go

beep bop boop, 06 May 2021yeah but still...pretty bad dont you thinkYeah the whole dozens of Redmi Note 9's and 10's thing is certainly confusing, but I don't think many people are even going to remember this name long enough to confuse it with other ones.

PMKLR3m, 04 May 20218gb Ram calculatorBut it's surly better than the manual typewriter you used in posting this sh*t.


I'm using VIVO Y51 currently.
I'll advise you give yourself a chance to purchase a vivo phone FROM A MAJOR PHONE MALL...

joe nodden, 04 May 2021I swear to god phone names are becoming more annoying overl... moreXiaomi and Sony are big culprits of bad naming

Alang Praharja, 04 May 2021Bad camera designIf you don't have the phone and you are concluding it has bad camera, then just shut up and allow those thavmt have it talk.

By the time I finished reading the model name I lost all interest in buying the phone.

This phone isn't bad but not good too ._.

the 480 has a lower TDP (3W compared to 5W), supports higher memory bandwidth, has 5G support via X51 modem, has a better ARM architecture