A leaked internal Vodafone Italy price list interestingly lists the price of the upcoming iPhone 3G S at the old continent. If you are not willing to enter into contract with Vodafone, you'd have to go for some quite steep contract-free prices to get one. 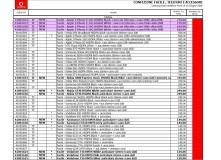 Interestingly, the same pricelist lists the iPhone 3G with unchanged prices meaning there will be price deduction if you opt for the now year-old model. An unlocked iPhone 3G 8GB costs 499 euro, while the 16GB version trades for 569 euro.

Again those price are commitment-free, we guess the carrier will subsidize the contract prices heavily. We really hope they don't pump up the iPhone monthly plans as well.

June is a hectic month for the industry this year and you can find some of the trend-setting mobiles hitting the stores these weeks.