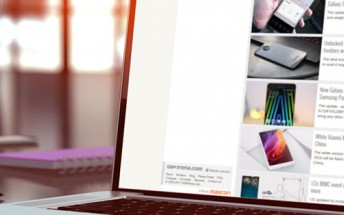 The year might be ending, but the smartphone releases aren't stopping. This week we finally saw the Samsung Galaxy A8s go official with a hole in the screen for the camera.

Samsung is likely testing the waters before trying the design alongside the Exynos 9820 chipset and calling it the Galaxy S10.

Honor is also in the game - we got to see the View 20 in person even if the actual launch is taking place after Christmas, with a global event scheduled for late January.

OnePlus 6T joined the company of devices with even faster charging technology after it introduced Warp Charge 30 with the McLaren Limited Edition that also has 10 GB RAM.

The vivo NEX Dual Display Edition was the most high profile launch of the week with a unique dual screen design and super cool Lunar ring around its back.

Apple and Qualcomm continued their legal battles - this time the playground is China and the focus is on the iPhone. The chipset company managed to block sales for a short time, but Cupertino is already answering with a software update that will stop the patent infringement.

Huawei nova 4 is expected to arrive a week ahead of Christmas with a hole for the selfie camera and 48 MP snapper on at least some of its versions.

It also has a triple-lens camera with telephoto.

It will have Honor's Link Turbo technology for simultaneous Wi-Fi + 4G use. A Chinese version named Honor V20 will be released later this month while the international launch will take place in Januar...

The stills are amazing.

Things look even better when you consider that the base storage will be upped to 128GB. There's also talk of the S10 wirelessly charging other devices.

OnePlus and McLaren team up to bring a Papaya Orange-flavored powerhouse.

The Galaxy S10 Lite and regular Galaxy S10 will stick to one selfie snapper and three on the back.

Many phones with notches and ones with punch hole cameras have chins, which makes them asymmetrical.

And an in-display fingerprint too.

Up for pre-order starting today.

Apple claims that all iPhone models remain available in China and that phones with iOS 12 don't violate the patents, anyway.

The device will likely be aimed at a younger audience with its gaming capabilities.

These devices will arrive with audio jack and plastic back, and no notch for the XL.

But they are also lighter and thinner.

Huawei nova 4 arrives at TENAA with a triple camera, including a 48MP sensor

Likely the same IMX586 sensor as the Honor View 20, but this time it has brought friends. The front of the nova 4 also has a punch hole selfie camera.

Apple is appealing the decision and continues to offer the affected models - X, 8 and older - through its website.

Because Samsung keeps its Infinity-O panels for itself.

Samsung Galaxy M20 has dual cameras and it's made of metal

Despite what previous rumors said, it's likely not to be the Mi 9.

Squashes some bugs and brings some new.

The device will launch on December 26 in China as Honor V20.

Not every Huawei nova 4 will have a 48MP sensor, leaked slide with specs reveals

Also, the expectations for a Kirin 980 chipset may not pan out - the slide says 970.

The 2017 flagship is still on Oreo, no Android Pie-based One UI in sight.

They run stock Android on Snapdragon 600-series chipsets and have 4,000mAh and 5,000mAh batteries, respectively.

We take a closer look at the 30 minute charging test. Which standard is the fastest?

Week 48 in review: Infinity-O leaks galore, Realme U1 is official

Week 47 in review: Samsung dominated the headlines with its S10 and A8s

Week 46 in review: Samsung's Galaxy S10, Exynos 9820, and foldable phone in the spotlight